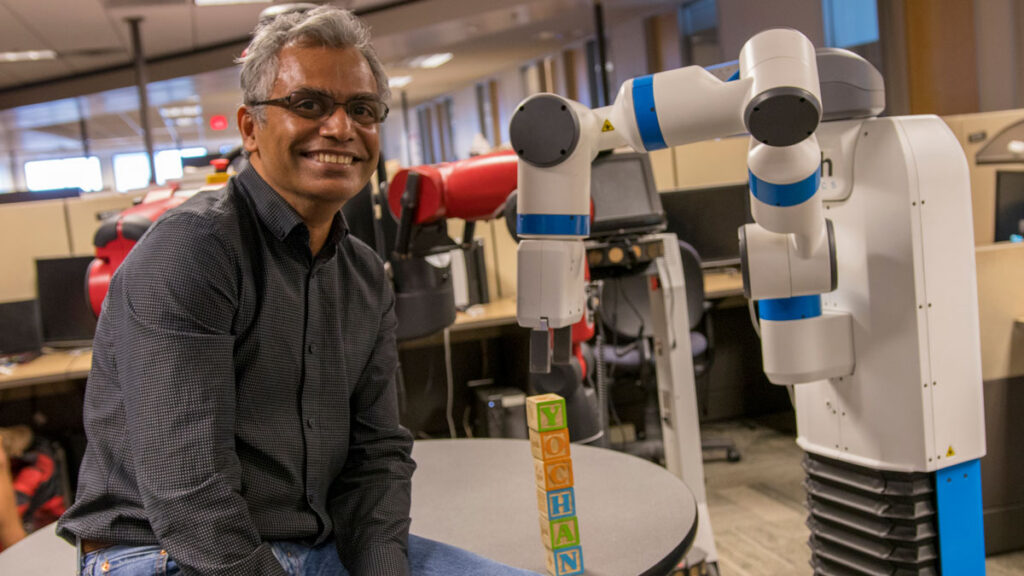 Subbarao Kambhampati, a professor of computer science in Ira A. Fulton Schools of Engineering at Arizona State University, was recently recognized with a Distinguished Alumnus Award from the Indian Institute of Technology, Madras.

Kambhampati earned an electrical engineering and electronics bachelor’s degree from IIT Madras, beginning the five-year program when he was 16 years old.

“I had my first course and research work on artificial intelligence there — way before it was cool — and have remained smitten by it ever since,” Kambhampati says. “Although my graduate work had been in computer science, AI has increasingly bridged computer science and electrical engineering to the point that I find many of the electrical engineering concepts I learned in my undergraduate study freshly useful.”

In the nearly 40 years since graduating from IIT Madras, Kambhampati has had a prolific career as a leading expert in artificial intelligence, particularly in the areas of planning, decision-making and human-AI interaction. He is proud of the group he has cultivated at ASU in the Yochan Lab and the research he has been able to do with student researchers.

Kambhampati also loves teaching, and says he is “thrilled” that his students also appreciate his teaching based on the positive feedback he has received on evaluations from his students. His excellence as an instructor has earned him college-level and department-level teaching awards. A student nomination praising Kambhampati’s entertaining and informative lectures led him to be invited to give a “Last Lecture” at ASU, in which academic leaders are asked to share wisdom on a topic that matters to them as if it were their last chance, as popularized in the bestselling book “The Last Lecture” by Randy Pausch.

The increased attention on artificial intelligence has made outreach and public education a growing part of Kambhampati’s work. He is often called upon as a subject matter expert in news, magazines, television broadcasts, podcasts and more.

Kambhampati says he hopes IIT Madras noticed his work in all these areas and chose to honor him for his efforts.

“I spent what were probably my most formative years at IIT Madras, and a recognition of my contributions from them is certainly gratifying,” says Kambhampati, who visits the IIT Madras campus when he is in Chennai, India, and has interacted with the institute’s artificial intelligence researchers for many years.

Kambhampati will be recognized alongside 10 additional distinguished alumni in a ceremony at the IIT Madras convocation over the summer.

Kambhampati has also earned a distinguished alumnus award in 2018 from the Computer Science Department at the University of Maryland, College Park, where he earned his doctoral degree in computer science.

Of all his achievements, Kambhampati is the proudest of the home he has made in the Valley with his wife, Fulton Schools Professor Chaitali Chakrabarti, who he points out was named a distinguished alumnus of her alma mater, IIT Kharagpur, a full four years earlier.