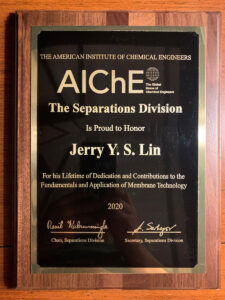 The American Institute of Chemical Engineers, or AIChE, organizes special sessions during its annual national meeting to honor chemical engineers for significant contributions to the field.

In 2020, Arizona State University Regents Professor Jerry Lin was honored for his lifetime dedication and career contributions to the fundamentals and application of membrane technology.

Due to the COVID-19 pandemic, AIChE held their annual national meeting virtually late last year. The meeting conducted five sessions in honor of Lin, featuring 18 invited speakers including prominent researchers in the field and former students of Lin, who presented alongside Lin’s own presentation.

Lin’s lab in the Ira A. Fulton Schools of Engineering currently works on membrane technologies for chemical process intensification. The goal is to improve energy efficiencies, carbon dioxide capture in electrical power plants, and the safety and efficiency of lithium-metal batteries for energy storage.

Regarding process intensification, Lin’s lab is focused on two groups of crystalline microporous membranes with a pore size in the sub-nanometer range, which are alumina-silicate zeolites and metal-organic-framework. These membranes enable the separation of gas and liquid molecules with very similar physical properties, such as propylene and propane mixture and xylene isomers.

Lin also works on ionic conducting ceramic membrane reactors for the conversion of coal or natural gas to hydrogen with simultaneous capture of carbon dioxide for chemical synthesis or electrical power generation. Additionally, Lin is developing lithium-ion batteries and lithium-metal batteries with inorganic membranes as a separator. These batteries show improved performance and are non-combustible and safe for energy storage applications.

Lin has published about 400 papers and holds nine patents in membranes, separation processes and energy storage. He is an elected Fellow of the American Society for the Advancement of Science, the American Institute of Chemical Engineers and the North American Membrane Society.