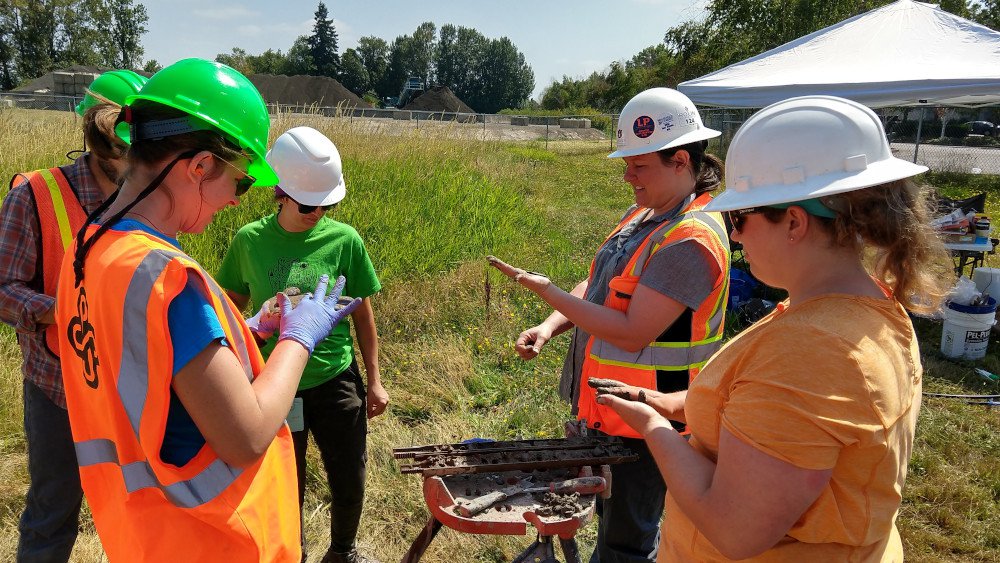 Catastrophic damage to infrastructure and natural resource areas has been caused around the world by soil liquefaction. It’s what happens when water pressure increases in soils that have little or no cohesive strength — often as a result of an earthquake — and causes the ground to severely destabilize.

A technique to prevent soil liquefaction has been developed by the Center for Bio-mediated and Bio-inspired Geotechnics, or CBBG. It’s a National Science Foundation Engineering Research Center directed by Edward Kavazanjian, an Arizona State University Regents Professor and the Ira A. Fulton Professor of Geotechnical Engineering.

Called microbially induced desaturation, or MID, the technique involves the propagation of gas-producing bacteria in soils that desaturate the soil to reduce the potential for liquefaction.

A CBBG team led by Ira A. Fulton Schools of Engineering Associate Professor Leon van Paassen collaborated with Portland State University, or PSU, geotechnical engineers to use the MID method to treat vulnerable soils in and around the city of Portland that are especially prone to liquefaction during earthquakes.

Field data from the project shows MID can significantly desaturate the silty soils characteristic of the Portland area, mitigating the potential for liquefaction even in the great “mega-thrust” earthquakes that strike off the coasts of Oregon and Washington, in an area called the Cascadia subduction zone, on the average of once every 300 to 400 years.

MID may not prove to be the optimal solution for new facilities that are built on soils at risk from liquefaction, Van Paassen says, but the method is particularly effective for mitigating liquefaction risk for soils in the Portland area underneath existing structures. That’s because nutrients used to stimulate the bacteria can be injected over relatively large distances without significantly disturbing the soil, which could cause the overlying structures to settle.

A report on the project, which is funded by the NSF, is published (on page 4) in the recent quarterly newsletter of the national Natural Hazards Engineering Research Infrastructure facility. 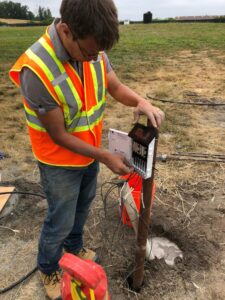 Fulton Schools Associate Professor Leon van Paassen, a senior investigator in the Fulton Schools Center for Bio-mediated and Bio-inspired Geotechnics led the center’s team in a research project in an earth-prone region in the Portland, Oregon area. He is shown installing a solar-powered wireless data logger for embedded sensors that measure hydraulic conductivity and the water content of soil. Photo courtesy of Arash Khosravifar

CBBG researchers provided the treatment “recipe” to the PSU team, enlisted the support of CBBG Industry Partner Geosyntec Consultants in the design of the treatment system and developed the monitoring program.

Van Paassen’s CBBG team is also participating in a post-treatment data interpretation and long-term monitoring and has collaborated with PSU on a proposal to NSF for follow-up studies.

Billions of dollars’ worth of civil infrastructure around the world is at risk from earthquake-induced soil liquefaction, including in Arizona, Kavazanjian says, and mitigation of liquefaction potential under and around existing facilities is a particularly intractable problem.

The MID technique being pioneered by CBBG is attracting attention from researchers worldwide as possibly the most promising technology for addressing this issue in a cost-effective manner, he adds.

Kavazanjian notes that based upon ground motion maps developed by the U.S. National Seismic Hazard Mapping Program, there is at least a 10% probability there will be earthquake motions severe enough to induce liquefaction in the next 250 years in approximately 40 percent of the United States. The proportion of areas around the world subject to strong ground motions from earthquakes is similar.