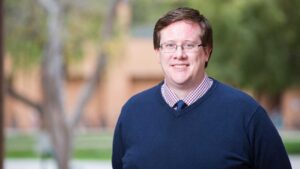 Kory Hedman, associate professor in the School of Electrical, Computer and Energy Engineering at Arizona State University, has been named the new director of the Power Systems Engineering Research Center, or PSERC. Hedman will replace ASU Regents Professor Vijay Vittal, who has held the position for the last 15 years.

PSERC was created in 1996 as a National Science Foundation Industry-University Cooperative Research Center to address critical challenges in creating a modern electric energy infrastructure. The center’s mission is to empower minds to engineer the future electric energy system.

Hedman’s first involvement with PSERC was as a master’s student at Iowa State University. His relationship with the center continued as he pursued his doctorate from UC Berkeley and through his faculty appointment at ASU. Hedman has led several PSERC research projects, served as ASU site director and as the markets STEM chair.

Stephen Philips, director of the School of Electrical, Computer and Energy Engineering, notes, “Professor Hedman’s impressive research record, coupled with his leadership in service to both the university and federal agencies positions him to advance one of ASU’s most impactful national research centers with 12 universities and 25 industry members.”

Kory Hedman takes the reins of PSERC in October 2020.