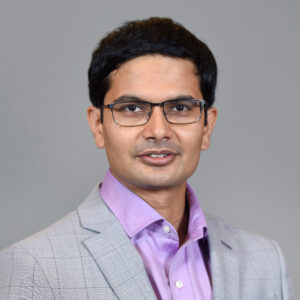 Gokul Pathikonda, an assistant professor of mechanical and aerospace engineering in the Fulton Schools, has been named an Emerging Leader by the Measurement Science and Technology journal. The journal publishes research articles on measurement techniques and instrumentation that advance measurement science.

Measurement Science and Technology defines an emerging leader as a top researcher in their field who completed their doctoral degree in 2009 or later. Pathikonda was chosen for this honor for his implementations of multi-diagnostic and multi-resolution measurement techniques to study flow turbulence in fluids. It is shown in his unique work implementing two laser-based measurement techniques simultaneously: particle-image velocimetry, or PIV, and planar-laser induced fluorescence imaging, or PLIF. This work was performed in a collaboration with Devesh Ranjan at Georgia Institute of Technology and Spectral Energies, LLC.

Though these techniques have been implemented before, Pathikonda used them in the first experiment of its kind to study high-speed mixing between two gasses of different densities driven by a shockwave.

This mixing process finishes within one hundredth of a second, and cameras and lasers capable of documenting such a high-speed phenomenon have not been available until recently. The measurements published in Pathikonda’s work were the fastest ever fully quantitative measurements of this kind, at 5,000 velocity measurements and 250,000 concentration measurements each taken 60,000 times per second.

Advances in understanding the mixing of fluids using these measurement methods is vital to understanding controlled fusion, heavy metal dispersal in supernovae, fuel-air mixing in scramjet engines and more.

In response to this recognition, Pathikonda says he is humbled, and shares plans for further explorations into these multi-diagnostic approaches to study more complex fluid flow phenomena at ASU.