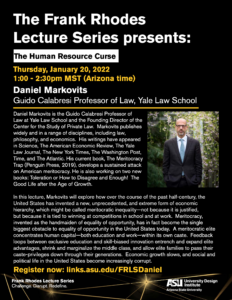 Learn how meritocracy has become the biggest obstacle to equality of opportunity in the United States today in this lecture based on the vast experience and research of Yale Law School Professor Daniel Markovits. ASU President Michael Crow will give a special introduction and the lecture will be moderated by Minu Ipe, managing director and vice chair of the University Design Institute.

In this lecture, Markovits will explore how over the course of the past half-century, the United States has invented a new, unprecedented, and extreme form of economic hierarchy, which might be called meritocratic inequality—not because it is justified, but because it is tied to winning at competitions in school and at work. Meritocracy, invented as the handmaiden of equality of opportunity, has in fact become the single biggest obstacle to equality of opportunity in the United States today. A meritocratic elite concentrates human capital—both education and work—within its own caste. Feedback loops between exclusive education and skill-biased innovation entrench and expand elite advantages, shrink and marginalize the middle class, and allow elite families to pass their caste-privileges down through their generations. Economic growth slows, and social and political life in the United States become increasingly corrupt.

Daniel Markovits is the Guido Calabresi Professor of Law at Yale Law School and the Founding Director of the Center for the Study of Private Law. Markovits publishes widely and in a range of disciplines, including law, philosophy, and economics. His writings have appeared in Science, The American Economic Review, The Yale Law Journal, The New York Times, The Washington Post, Time, and The Atlantic. His current book, The Meritocracy Trap (Penguin Press, 2019), develops a sustained attack on American meritocracy. He is also working on two new books: Toleration or How to Disagree and Enough! The Good Life after the Age of Growth.