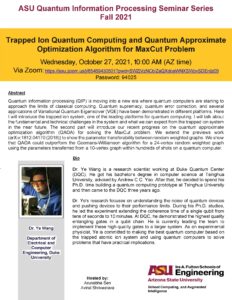 Quantum information processing (QIP) is moving into a new era where quantum computers are starting to approach the limits of classical computing. Quantum supremacy, quantum error correction and several applications of Variational Quantum Eigensolver (VQE) have been demonstrated in different platforms. Here, Ye Wang will introduce the trapped ion system, one of the leading platforms for quantum computing. He will talk about the fundamental and technical challenges in the system and what we can expect from the trapped ion system in the near future. Then he will introduce his team’s recent progress on the quantum approximate optimization algorithm (QAOA) for solving the MaxCut problem. He extends the previous work to show the parameter transferability between random weighted graphs. He also shows that QAOA could outperform the Goemans-Williamson algorithm for a 24-vertex random weighted graph using parameters transferred from a 10-vertex graph within hundreds of shots on a quantum computer.

Wang’s research focuses on understanding the noise of quantum devices and pushing devices to their performance limits. During his doctoral studies, he led the experiment extending the coherence time of a single qubit from tens of seconds to 10 minutes. At the Duke Quantum Center, he demonstrated the highest quality entangling gates in a qubit chain. He is currently leading the team to implement these high-quality gates to a larger system. As an experimental physicist, Wang is committed to making the best quantum computer based on the trapped atomic ion system and using quantum computers to solve problems that have practical implications.