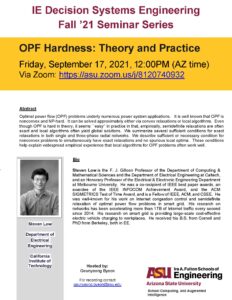 Attend the next IE Decision Systems Engineering Fall ’21 Seminar Series event with Steven Low from the California Institute of Technology, hosted by Geunyeong Byeon in the School of Computing and Augmented Intelligence.

Optimal power flow, or OPF, problems underly numerous power system applications. It is well known that OPF is nonconvex and NP-hard. It can be solved approximately either via convex relaxations or local algorithms. Even though OPF is hard in theory, it seems “easy” in practice in that, empirically, semidefinite relaxations are often exact and local algorithms often yield global solutions. Steven Low summarizes several sufficient conditions for exact relaxations in both single and three-phase radial networks. He describes sufficient or necessary conditions for nonconvex problems to simultaneously have exact relaxations and no spurious local optima. These conditions help explain widespread empirical experience that local algorithms for OPF problems often work well.

Steven Low is the F. J. Gilloon Professor of the Department of Computing and Mathematical Sciences and the Department of Electrical Engineering at Caltech, and an Honorary Professor of the Electrical and Electronic Engineering Department at Melbourne University. He was a co-recipient of IEEE best paper awards, an awardee of the IEEE INFOCOM Achievement Award and the ACM SIGMETRICS Test of Time Award. Low is a Fellow of IEEE, ACM and CSEE. He was well known for his work on internet congestion control and semidefinite relaxation of optimal power flow problems in the smart grid. His research on networks has been accelerating more than 1 terabyte of internet traffic every second since 2014. His research on the smart grid is providing large-scale cost-effective electric vehicle charging to workplaces. He received his Bachelor of Science from Cornell and his doctorate from Berkeley, both in electrical engineering.