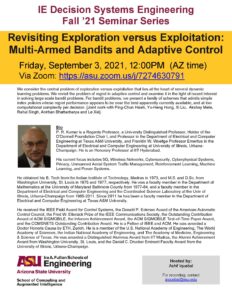 We consider the central problem of exploration versus exploitation that lies at the heart of several dynamic learning problems. We revisit the problem of regret in adaptive control and examine it in the light of recent interest in solving large-scale bandit problems. For bandit problems, we present a family of schemes that admits simple index policies whose regret performance appears to be near the best apparently currently available, and at low computational complexity per decision. This is joint work with Ping-Chun Hsieh, Yu-Heng Hung, Xi Liu, Akshay Mete, Rahul Singh, Anirban Bhattacharya and Le Xie.

He received the IEEE Field Award for Control Systems, the Donald P. Eckman Award of the American Automatic Control Council, the Fred W. Ellersick Prize of the IEEE Communications Society, the Outstanding Contribution Award of ACM SIGMOBILE, the Infocom Achievement Award, the ACM SIGMOBILE Test-of-Time Paper Award and the COMSNETS Outstanding Contribution Award. He is a Fellow of IEEE and ACM. He was awarded a Doctor Honoris Causa by ETH, Zurich. He is a member of the U.S. National Academy of Engineering, the World Academy of Sciences, the Indian National Academy of Engineering and the Academy of Medicine, Eegineering and Science of Texas. He was awarded a Distinguished Alumus Award from IIT Madras, the Alumni Achievement Award from Washington University, St. Louis and the Daniel C. Drucker Eminent Faculty Award from the University of Illinois, Urbana-Champaign.