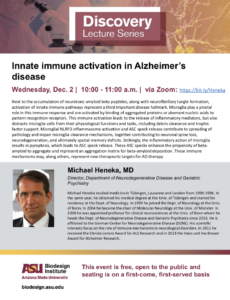 Next to the accumulation of neurotoxic amyloid beta peptides, along with neurofibrillary tangle formation, activation of innate immune pathways represent a third important disease hallmark. Microglia play a pivotal role in this immune response and are activated by binding of aggregated proteins or aberrant nucleic acids to pattern recognition receptors. This immune activation leads to the release of inflammatory mediators, but also distracts microglia cells from their physiological functions and tasks, including debris clearance and trophic factor support. Microglial NLRP3 inflammasome activation and ASC speck release contribute to spreading of pathology and impair microglia clearance mechanisms, together contributing to neuronal spine loss, neurodegeneration, and ultimately spatial memory deficits. Strikingly, the inflammatory action of microglia results in pyroptosis, which leads to ASC speck release. These ASC specks enhance the propensity of beta-amyloid to aggregate and represent an aggregation matrix for beta-amyloid deposition. These immune mechanisms may, along others, represent new therapeutic targets for AD therapy.

Michael Heneka studied medicine in Tübingen, Lausanne and London from 1990-1996. In the same year, he obtained his medical degree at the Univ. of Tübingen and started his residency at the Dept. of Neurology. In 1999 he joined the Dept. of Neurology at the Univ. of Bonn. In 2004 he became the chair of Molecular Neurology at the Univ. of Münster. In 2008 he was appointed professor for clinical neurosciences at the Univ. of Bonn where he heads the Dept. of Neurodegenerative Disease and Geriatric Psychiatry since 2016. He is affiliated to the German Center for Neurodegenerative Disease (DZNE). His scientific interests focus on the role of immune mechanisms in neurological disorders. In 2011 he received the Christa Lorenz Award for ALS Research and in 2013 the Hans und Ilse Breuer Award for Alzheimer Research.