Discovery Lecture Series: Prions, pathogenesis and patient-tested therapies — the best is yet to come 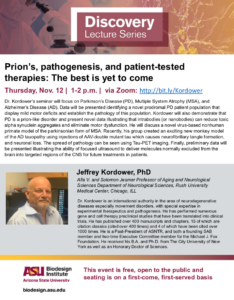 Jeffrey Kordower, a professor from Rush University Medical Center in Chicago, will talk about a novel treatment for Parkinson’s disease, Multiple System Atrophy and Alzheimer’s disease.

Prions, pathogenesis and patient-tested therapies: The best is yet to come
Thursday, November 12, 2020
1–2 p.m.
Attend on Zoom

Jeffrey Kordower’s seminar will focus on Parkinson’s Disease (PD), Multiple System Atrophy (MSA), and Alzheimer’s Disease (AD). Data will be presented identifying a novel prodromal PD patient population that display mild motor deficits and establish the pathology of this population. Kordower will also demonstrate that PD is a prion-like disorder and present novel data illustrating that intrabodies (or nanobodies) can reduce toxic alpha synuclein aggregates and eliminate motor dysfunction. He will discuss a novel virus-based nonhuman primate model of the parkinsonian form of MSA. Recently, his group created an exciting new monkey model of the AD tauopathy using injections of AAV-double mutant tau which causes neurofibrillary tangle formation, and neuronal loss. The spread of pathology can be seen using Tau-PET imaging. Finally, preliminary data will be presented illustrating the ability of focused ultrasound to deliver molecules normally excluded from the brain into targeted regions of the CNS for future treatments in patients.

Kordower is an international authority in the area of neurodegenerative diseases especially movement disorders, with special expertise in experimental therapeutics and pathogenesis. He has performed numerous gene and cell therapy preclinical studies that have been translated into clinical trials. He has published over 400 manuscripts and chapters, 15 of which are citation classics (cited over 400 times) and four of which have been cited over 1000 times. He is a Past-President of ASNTR, and both a founding SAB member and two-time Executive Committee member for the Michael J. Fox Foundation. He received his bachelor’s and doctorate from The City University of New York as well as an Honorary Doctor of Sciences.