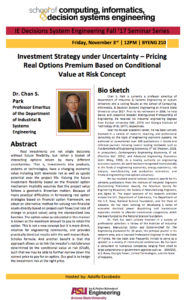 Learn more about investment strategy under uncertainty from a leading authority on engineering economic systems during a seminar from the IE Decisions System Engineering seminar series.

Real investments are not single decisions without future flexibility, but rather a basket of interacting options driven by many different uncertainties. That is, investments into products, systems or technologies have a changing economic value including both downside risk as well as upside potential over the project life. Valuing the future investment flexibility based on the financial option mechanism implicitly assumes that the project value follows a geometric Brownian motion.

Because of many practical difficulties in formulating real option strategies based on financial option framework, we adopt an alternative method for valuing non-financial assets directly based on project cash flows (not rate of change in project value) using the standardized loss function. The option value as calculated in this manner is known as the maximum amount to pay to retain the option.

This is not a new concept but it is more direct, intuitive for engineering community, and provides practically identical results with the well-known Black-Scholes formula. Another benefit is that this approach allows us to link the investor’s risk tolerance determined by the conditional value at risk (CVaR), such that we may be able to further narrow down the correct price to pay for an option.

Our goal is to hedge the investment risk at the right price.

Over his 40-year academic career, he has been actively involved in a variety of research, teaching, and professional consulting on the topic of engineering economic systems. He authored or co-authored over 100 publications in books and refereed journals including several leading textbooks such as Fundamentals of Engineering Economics, 4th ed. (Pearson, 2018, in production), Contemporary Engineering Economics, 6h ed. (Prentice Hall, 2015), and Advanced Engineering Economics (John Wiley, 1990).

He has received several national research awards for his scholarly publications from the Institute of Industrial Engineers (Outstanding Publication Award), the American Society for Engineering Education, the Society of Manufacturing Engineers, and Sigma Xi. The major sponsors of his research activities include the U.S. Department of Commerce, The Department of the U.S. Navy, National Science Foundation, and the State of Alabama.

He has been working on developing a series of economic electrical power dispatching and transmission expansion models to alleviate transmission congestions, which has been funded by the National Science Foundation.

Park has been actively involved in a variety of professional activities: a Fellow of the Institute of Industrial Engineers, Manuscript Editor and Editor-in-Chief for The Engineering Economist for 15 years, the principal journal in his research area, and a licensed Professional Engineer in the State of Florida. He has been also frequently invited to serve as a speaker at a variety of international conferences. He has been a consultant to numerous companies and agencies such as SIEMENS, U.S. Navy, Georgia Power, United Technologies and the State of Alabama.