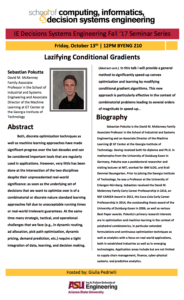 Learn how we can make optimization and machine learning faster with a few algorithm modifications in this Industrial Engineering Decision Systems Engineering Fall 2017 Seminar Series event hosted by Giulia Pedrielli.

Both discrete optimization techniques and machine learning approaches have made significant progress over the last decades and can be considered important tools that are regularly used in applications.

However, very little has been done at the intersection of the two disciplines, despite their unprecedented real-world significance: as soon as the underlying set of decisions that we want to optimize over is of a combinational or discrete nature, standard learning approaches fail due to unacceptable running times or real-world irrelevant guarantees.

In this talk, Sebastian Pokutta will provide a general method to significantly speed up convex optimization and learning by modifying conditional gradient algorithms. This new approach is particularly effective in the context of combinational problems leading to several orders of magnitude in speed up.

Sebastian Pokutta is the David M. McKenney Family Associate Professor in the School of Industrial and Systems Engineering and an Associate Director of the Machine learning @ GTCenter at the Georgia Institute of Technology.

Having received both his bachelor’s and doctorate in mathematics from the University of Duisburg-Essen in Germany, Pokutta was a postdoctoral researcher and visiting lecturer at MIT, worked for IBM ILOG and Krall Demmel Baumgarten.

Prior to joining the Georgia Institute of Technology, he was a professor at the University of Erlangen-Nürnberg. Pokutta received the David M. McKenney Family Early Career Professorship in 2016, an NSF CAREER Award in 2015, the Coca-Cola Early Career Professorship in 2014, the outstanding thesis award of the University of Duisburg-Essen in 2006, as well as various Best Paper awards.

Pokutta’s primary research interests are in optimization and machine learning in the context of polyhedral combinatorics, in particular extended formulations and continuous optimization techniques as well as analytics with a focus on real-world applications, both in established industries as well as in emerging technologies. Application areas include, but are not limited to, supply chain management, finance, cyber-physical systems and predictive analysis.