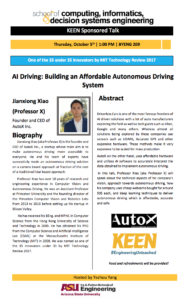 Driverless cars is one of the most famous frontiers of AI-driven solutions with a lot of auto manufacturers exploring the field as well as tech giants such as Uber, Google and many others. Whereas almost all solutions being explored by these companies use sensors such as LIDARS, Accurate GPS and other expensive hardware, these methods make it very expensive to be scaled for mass production.

AutoX, on the other hand, uses affordable hardware and utilizes AI software to accurately interpret the data obtained to implement autonomous driving.

Professor Xiao has more than 10 years of research and engineering experience in computer vision and autonomous driving. He was an assistant professor at Princeton University and the founding firector of the Princeton Computer Vision and Robotics Labs from 2013 to 2016 before setting up his startup in Silicon Valley.

He has received his bachelor’s of engineering and master’s of philosophy in computer science from the Hong Kong University of Science and Technology in 2009. He has obtained his doctorate from the Computer Science and Artificial Intelligence Lab (CSAIL) at the Massachusetts Institute of Technology in 2008. He was named one of the 35 Innovators under 35 by MIT Technology Review 2017.