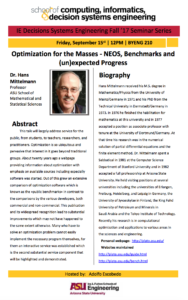 Optimization affects everyone. Learn how public benchmarks and other interactive services can help you with optimization in this IE Decision Systems Engineering Fall 2017 Seminar Series talk hosted by Assistant Professor Adolfo Escobedo.

Optimization for the Masses-NEOS, Benchmarks and (un)expected Progress
Presented by Hans Mittelmann, ASU School of Mathematical and Statistical Sciences

This talk will largely address service for the public, from students to teachers, researchers and practitioners. Optimization is so ubiquitous and pervasive that interest in it goes beyond traditional groups. About 20 years ago a webpage providing information about optimization with emphasis on available sources including specialty software was started. Out of this grew an extensive comparison of optimization software, which is known as the “public benchmarks” in contrast to the comparisons by the various developers, both commercial and non-commercial.

This publication and its widespread recognition led to substantial improvements that may not have happened to the same extent otherwise. Many who have to solve an optimization problem cannot easily implement the necessary program themselves, so for them an interactive service was established that is the second substantial service component this talk will highlight and demonstrate.

Hans Mittelmann received his master’s degree in mathematics and physics from the University of Mainz, Germany, in 1971 and his doctorate from the Technical University in Darmstadt, Germany, in 1973. In 1976 he finished the habilitation for mathematics at this university and in 1977 he accepted a position as associate professor with tenure at the University of Dortmund, Germany. At that time, his research was in the numerical solution of partial differential equations and the finite element method.

Mittelmann spent a sabbatical in 1981 at the Computer Science Department of Stanford University and in 1982 accepted a full professorship at Arizona State University.

He held visiting positions at several universities including the universities of Erlangen, Freiburg, Heidelberg and Leipzig in Germany, the University of Jyvaeskylae in Finland, the King Fahd University of Petroleum and Minerals in Saudi Arabia and the Tokyo Institute of Technology.

Recently his research is in computational optimization and applications to various areas in the sciences and engineering.