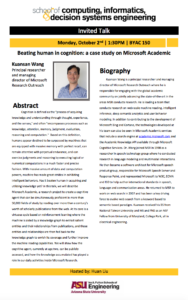 With the amount of memory and processing power machines have, they’re almost destined to beat humans in cognition someday. Professor Huan Liu invites you to a talk exploring Microsoft Academic, which aims to create a cognitive agent that is a master of knowledge of more than 50,000 fields of study.

Cognition is defined as the “process of acquiring knowledge and understanding through thought, experience and the senses,” and often “encompasses processes such as knowledge, attention, memory, judgment, evaluation, reasoning and computation.” Based on this definitions, humans appear destined to be surpassed by machines that are equipped with massive memory with perfect recall, can remain attentive with perpetual endurance and can exercise judgments and reasoning by executing logical or numerical computations in a much faster and precise fashion.

With massive amounts of data and computation powers, machines have made great strides in exhibiting intelligent behaviors. Have machines beaten humans in acquiring and utilizing knowledge yet?

In this talk, Wang will describe Microsoft Academic, a research project to create a cognitive agent that can be simultaneously proficient in more than 50,000 fields of study by reading more than a century’s worth of scholarly publications from the web. At its core it is a virtuous cycle based on reinforcement learning where the machine is aided by a knowledge graph to extract salient entities and their relationships from publications, and these entities and relationships are then fed back to the knowledge graph to enrich its coverage and further improve its machine reading capabilities.

Wang will show how the cognitive agent, currently at age two, can be publicly accessed and how the knowledge accumulated has played a role in Microsoft Research’s daily activities.

Kuansan Wang is a principal researcher and managing director of Microsoft Research Outreach where he is responsible for engaging with the global academic community on jointly advancing the state-of-the-art in the areas Microsoft Research conducts research. He is leading a team that conducts research on web-scale machine reading, intelligent interference, deep semantic analytics and user behavior modeling. In addition to contributing to the development of Microsoft Big and Cortana, the technologies developed at his team can also be seen in Microsoft Academic services that include a search engine at academic.microsoft.com and the Academic Knowledge API available through Microsoft Cognitive Services.

Wang joined Microsoft Research in 1998 as a researcher in the speech technology group where he conducted research in language modeling and multimodal interactions. He then became a software architect for the Microsoft speech product group where he was responsible for Microsoft Speech Server and Research Point, and represented Microsoft to W3C, ECMA and ISO to help author international standards in speech, language and communication areas. He returned to Microsoft Research to work on web search in 2007 and has been a key driving force to evolve web search from a keyword-based to a semantic-based paradigm.

Wang received his bachelor’s from National Taiwan University and his master’s and doctorate as an NSF Fellow from the University of Maryland, College Park, all in electrical engineering.