More than three and a half decades of exceptional contributions to research, scholarship and professional service, as well as steadfast dedication to teaching and mentorship, have earned Fulton Schools Regents’ Professor Bruce Rittmann the honored status of Fellow in the Association of Environmental Engineering and Science Professors.

The international organization’s membership of about 700 boasts some of the most accomplished professors who provide education in the sciences and technologies of environmental protection. 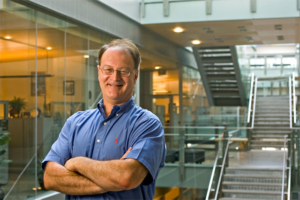 Rittmann’s qualifications for Fellow stature in the association are detailed by colleagues who nominated him for the distinction.

Rittmann has a record of “long-standing excellence” in all aspects of his work during a career that has made him “a role model for academics all around the world,” wrote Krishna Pagilla, a professor with the University of Nevada, Reno.

His “numerous outstanding contributions” to advances in water safety and treatment were cited by Perry McCarty, a Stanford University professor emeritus.

McCarty emphasized Rittmann’s “pioneering applications” of molecular biology tools to improving water treatments systems, which have led to new concepts and methods “widely used in the ecological and medical fields.”

University of Michigan Professor Nancy G. Love, one of Rittmann’s former students, lauded his talents for teaching and mentoring that not only educates students but motivates and inspires them.

Along his success in research and scholarship, Love wrote, “Bruce remains 200 percent committed as a teacher and mentor. He has never lost the core of why he became a faculty member.”

Rice University Professor Pedro J. Alvarez noted that Rittmann’s standing as a “prominent and prolific leader” in the biological aspects of environmental engineering has been boosted in recent years by work that is opening new possibilities for harvesting renewable energy, such as producing biofuel from algae.

The AEESP Fellow designation adds to Rittmann’s voluminous list of awards and achievements. Among the most prestigious was his election to the National Academy of Engineering just before joining Arizona State University in 2004. He has since become a Distinguished Member of the American Society of Engineers and been named an ASU Regents’ Professor — the highest designation bestowed on faculty members in the state’s three universities.

He has been the director of the Swette Center for Environmental Biotechnology in ASU’s Biodesign Institute for more than 12 years, and last year his significant contributions to that field earned him another AEESP award.

Earlier this year, Rittmann was also made a Fellow of the National Academy of Inventors.

He’s now a Fellow in several of the leading professional organizations dedicated to the branches of science and engineering on which his research focuses.

The latest honor was announced at AEESP’s biannual conference at the University of Michigan.