Berkeley honoring Kavazanjian as one of its distinguished alumni

Fulton Schools Professor Edward Kavazanjian has been elected to the University of California, Berkeley’s Civil and Environmental Engineering Academy of Distinguished Alumni. He earned his doctoral degree at Berkeley in civil engineering, specializing in geotechnical engineering.

The university has one of the world’s top-ranking civil and environmental engineering programs. Through membership in its alumni academy, the program honors graduates who “have contributed greatly to societal well‐being and development, both in the U.S. and around the globe.” 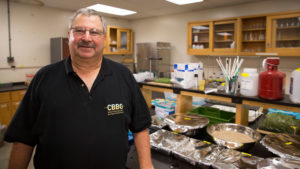 Kavazanjian is an international leader in the field of geotechnical engineering, particularly landfill engineering and seismic design to fortify structures against the impact of earthquakes.

He has served as lead engineer for analysis and design of some of the most significant hazardous waste sites in the world.

He was the lead author of the Federal Highway Administration guidance document on Seismic Design of Geotechnical Transportation Features and Structural Foundations.

In recent years he has emerged as one of the researchers working at the forefront of the emerging field of biogeotechnical engineering, which focuses on using or emulating natural processes in developing innovative methods and technologies for engineering geotechnical systems.

He directs the National Science Foundation Center for Bio-mediated and Bio-inspired Geotechnics at Arizona State University.

Kavazanjian joined the ASU faculty in 2004 after two decades in the geoenvironmental engineering industry and has since become a Regents’ Professor — the highest distinction bestowed on faculty members at Arizona’s state universities — and been elected to the National Academy of Engineering.

He also holds the Ira A. Fulton Chair professorship in the School of Sustainable Engineering and the Built Environment.

Beyond industry, research and academia, he has served in numerous leadership roles on committees and advisory groups for the National Research Council and the American Society of Civil Engineers.

He is the current president of the United States Universities Council on Geotechnical Education and Research, which represents more the 120 colleges and universities in the U.S. that offer geotechnical engineering curriculum.

Kavazanjian will be honored with other new members of Berkeley’s distinguished civil and environmental engineering alumni at banquet at the university on Thursday, October 5, 2017.