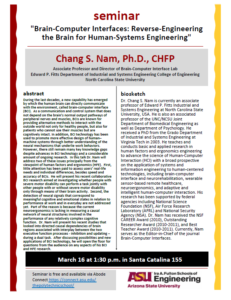 Learn how the brain can interact with the world through brain-computer interfaces and how to overcome their challenges of implementation.

During the last decades, a new capability has emerged by which the human brain can directly communicate with the environment, called brain-computer interface (BCI). As a communication and control system that does not depend on the brain’s normal output pathways of peripheral nerves and muscles, BCIs are known for providing alternative methods to interact with the outside world not only for healthy people, but also for patients who cannot use their muscles but are cognitively intact. In addition, BCI technology has been used to promote more effective design of human–machine systems through better understanding of the neural mechanisms that underlie work behaviors.

However, there still remain many key knowledge gaps despite advances in BCI technology and a considerable amount of ongoing research. In this talk, Nam will address two of these issues principally from the viewpoint of human factors and ergonomics (HFE).

First, little attention has been paid to assess users’ real-life needs and individual differences, besides speed and accuracy of BCIs. He will present his recent collaborative BCI research aimed at investigating whether people with severe motor disability can perform a task jointly with other people with or without severe motor disability only through means of their brain activity. Second, the detection of neural signals that correspond to meaningful cognitive and emotional states in relation to performance at work and in everyday are not addressed yet. Part of the reason is because the current neuroergonomics is lacking in measuring a causal network of neural structures involved in the performance of any relatively complex cognitive function.

Nam will present his recent studies that looked into directed causal dependencies of brain regions associated with interplay between the two executive function processes — inhibition and updating — during a dual task. After discussing possibilities and new applications of BCI technology, he will open the floor for questions from the audience on any aspects of his BCI and HFE research.

He teaches and conducts basic and applied research in human factors and ergonomics engineering to advance the science of Human-Computer Interaction (HCI) with a broad prospective on the application of systems and information engineering to human-centered technologies, including brain-computer interface and neurorehabilitation, wearable sensor-based remote healthcare, neuroergonomics, and adaptive and intelligent human-computer interaction.