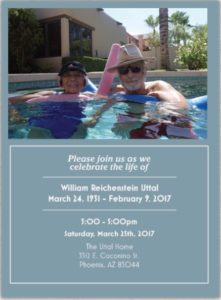 Uttal authored dozens of important books in his field and more than 140 scholarly articles.

Uttal was introduced to the study of electronics and computing in the Air Force during the Korean War. After the war, he worked in the aviation industry programming computers before deciding to continue his education. He pursued his doctorate at the Ohio State University where his research focused on experimental psychology and biophysics. He studies and subsequent research at IBM occurred during an interesting time in computing history. Uttal recalled having to salvage a computer doomed to a crusher in order to get a machine to work with in anecdotes told to Russ McMahon for a University of Cincinnati computing blog.

Through it all, he contributed valuable knowledge to the intersection of psychology and computing.

After teaching at the University of Michigan for more than 20 years and three years of work with the Navy in Hawaii to research autonomous underwater vehicle system vision, he joined ASU in 1988. At ASU, he was the chair of the Psychology department, and later took his expertise to help engineering faculty. He studied visual systems as well as the neural and psychological foundations behind human interactions with computers.

Celebrate Uttal’s life and achievements at a memorial service on Saturday, March 25 at the Uttals’ home.

In lieu of flowers, the family requests donations to Hospice of the Valley in the name of William Uttal.