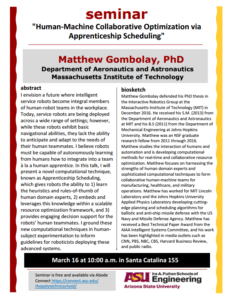 Robot helpers are almost everywhere performing a variety of tasks. Learn about a new computational technique, Apprenticeship Scheduling, that will make our robotic assistants even smarter.

Matthew Gombolay envisions a future where intelligent service robots become integral members of human-robot teams in the workplace. Today, service robots are being deployed across a wide range of settings; however, while these robots exhibit basic navigational abilities, they lack the ability to anticipate and adapt to the needs of their human teammates. Gombolay believes robots must be capable of autonomously learning from humans how to integrate into a team à la a human apprentice.

In this talk, Gombolay will present a novel computational technique, known as Apprenticeship Scheduling, which gives robots the ability to 1) learn the heuristics and rules-of-thumb of human domain experts, 2) embeds and leverages this knowledge within a scalable resource optimization framework, and 3) provides engaging decision support for the robots’ human teammates. He grounds these new computational techniques in human-subject experimentation to inform guidelines for roboticists deploying these advanced systems.

Matthew Gombolay defended his doctoral thesis in the Interactive Robotics Group at the Massachusetts Institute of Technology (MIT) in December 2016. He received his master’s degree (2013) from the Department of Aeronautics and Astronautics at MIT and his bachelor’s degree (2011) from the Department of Mechanical Engineering at Johns Hopkins University. Gombolay was an NSF graduate research fellow from 2011 through 2016.

He studies the interaction of humans and automation and is developing computational methods for real-time and collaborative resource optimization. He focuses on harnessing the strengths of human domain experts and sophisticated computational techniques to form collaborative human-machine teams for manufacturing, healthcare, and military operations.

Gombolay has worked for MIT Lincoln Laboratory and the Johns Hopkins University Applied Physics Laboratory developing cutting-edge planning and scheduling algorithms for ballistic and anti-ship missile defense with the US Navy and Missile Defense Agency. He has received a Best Technical Paper Award from the AIAA Intelligent Systems Committee, and his work has been highlighted in media outlets such as CNN, PBS, NBC, CBS, Harvard Business Review and public radio.