Broadening Participation in Engineering: Moving Forward by Honoring the Past, Feb. 9 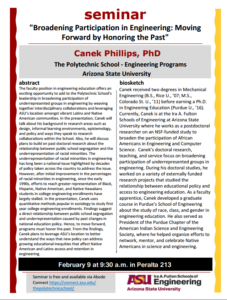 Broadening Participation in Engineering: Moving Forward by Honoring the Past
Presented by Canek Phillips, Ph.D, The Polytechnic School

This free seminar is also available via Adobe Connect.

The faculty position in engineering education offers an exciting opportunity to add to the Polytechnic School’s leadership in broadening participation of underrepresented groups in engineering by weaving together interdisciplinary collaborations and leveraging ASU’s location amongst vibrant Latinx and Native American communities. In the presentation, Canek will talk about his background in research areas such as design, informal learning environments, epistemology, and policy and ways they speak to research collaborations within the School. Also, he will discuss plans to build on past doctoral research about the relationship between public school segregation and the underrepresentation of racial minorities. The underrepresentation of racial minorities in engineering has long been a national issue highlighted by decades of policy taken across the country to address the issue. However, after initial improvement in the percentages of racial minorities in engineering, since the early 1990s, efforts to reach greater representation of Black, Hispanic, Native American, and Native Hawaiians students in college engineering enrollments have largely stalled. In the presentation, Canek uses quantitative methods popular in sociology to study first year college engineering enrollments. Findings suggest a direct relationship between public school segregation and underrepresentation caused by past changes in national education policy. Hence, to move forward, programs must honor the past. From the findings, Canek plans to leverage ASU’s location to better understand the ways that new policy can address growing educational inequities that affect Native American and Latinx access and retention in engineering.

Canek received two degrees in Mechanical Engineering (B.S., Rice U., 2007; M.S., Colorado St. U., 2011) before earning a doctorate in Engineering Education (Purdue U., 2016). Currently, Canek is at the Ira A. Fulton Schools of Engineering at Arizona State University where he works as a postdoctoral researcher on an NSF-funded study to broaden the participation of African Americans in Engineering and Computer Science. Canek’s doctoral research, teaching, and service focus on broadening participation of underrepresented groups in engineering. During his doctoral studies, he worked on a variety of externally funded research projects that studied the relationship between educational policy and access to engineering education. As a faculty apprentice, Canek developed a graduate course in Purdue’s School of Engineering about the study of race, class, and gender in engineering education. He also served as President of the Purdue Chapter of the American Indian Science and Engineering Society, where he helped organize efforts to network, mentor, and celebrate Native Americans in science and engineering.