Turning to nano-engineering to fight off troublesome frost and ice

Frost and ice formation is a nagging threat to the performance of aircraft, ships, turbines, engines and other machines and technologies that must operate in cold temperatures.

Konrad Rykaczewski, a Fulton Schools assistant professor of aerospace and mechanical engineering, has been working on alternatives to conventional time-consuming and expensive chemical, mechanical and thermal methods of preventing ice and frost buildup. 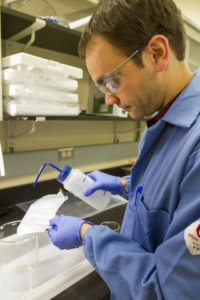 Assistant Professor Konrad Rykaczewski’s lab is working to solve problems caused when frost, ice and moisture builds up in places where its impact is detrimental. Photographer: Jessica Hochreiter/ASU

His solution involves developing nano-engineered surfaces with properties that enable them to repel water, but also prevent nucleation of frost, thus also keeping all possible forms of ice from building up.

Nucleation is a physical process in which a change of state — for example, from liquid to solid — occurs in a substance around certain focal points, known as nuclei.

Rykaczewski’s progress is detailed in an article on the research and tech news website Nanowerk. The article is based on a paper by Rykaczewski and soon-to-be-graduating Fulton Schools doctoral student Xiaoda Sun published recently in the American Chemical Society journal ACS Nano.

The Nanowerk article describes in detail their work on a novel method involving designs for coatings that prevent frost nucleation by altering water vapor concentration in the air just above the coating. This is in contrast to traditional approach of inhibiting nucleation that relies on increasing energetic barriers with hydrophobic coatings.

Rykaczewski and Sun theoretically and experimentally demonstrated that optimizing their bi-layer coatings with nanoscale features can prevent frost from forming in temperatures as low as -40 degrees Celsius.

Read more news about the discoveries he has made that led him to research this new approach to a de-icing method.

Rykaczewski has also been applying aspects of this research to biological studies sponsored by The Biomimicry Center at ASU in collaboration with the Desert Botanical Gardens in Phoenix.

Those studies include an examination of the water storage and collection abilities of cacti and a search for effective ways to solve the difficult problem of washing aphids off of kale.