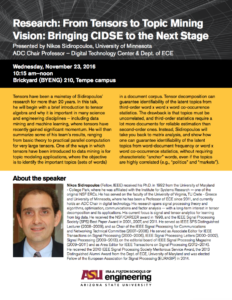 Tensors have been a mainstay of Sidiropoulos’ research for more than 20 years. In this talk, he will begin with a brief introduction to tensor algebra and why it is important in many science and engineering disciplines – including data mining and machine learning, where tensors have recently gained significant momentum. He will then summarize some of his team’s results, ranging from basic theory to practical parallel computation for very large tensors. One of the ways in which tensors have been introduced to data mining is for topic modeling applications, where the objective is to identify the important topics (sets of words) in a document corpus. Tensor decomposition can guarantee identifiability of the latent topics from third-order word x word x word co-occurrence statistics. The drawback is that topics must be uncorrelated, and third-order statistics require a lot more documents for reliable estimation than second-order ones. Instead, Sidiropoulos will take you back to matrix analysis, and show how one can guarantee identifiability of the latent topics from word-document frequency or word x word co-occurrence statistics, without requiring characteristic “anchor” words, even if the topics are highly correlated (e.g., “politics” and “markets”).