The Fulton Schools Maroon team leads against the Walter Cronkite School of Journalism and Mass Communication in match 4 of the final day of the 2016 Academic Bowl competition. Photo source: twitter.com/ASUAcademicBowl

The Fulton Schools’ Maroon and Gold Academic Bowl teams worked hard in the 2016 competition. The students had a good time and faced off against some really smart Sun Devils. 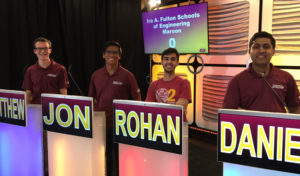 During Wednesday’s Academic Bowl play, they first faced the College of Liberal Arts and Sciences Maroon team and lost, putting them in a tough position of needing to win the remainder of their matches for the rest of the competition. They had a comfortable victory against their next opponent, the Walter Cronkite School of Journalism and Mass Communication, and then went up against the W.P. Carey School of Business Gold team.

“It was a close match, coming down to the final seconds,” said Maroon team member and aerospace engineering student Matt Askins.

A final score of W.P. Carey 185, Fulton Schools 175 — a margin of one 10-point question — put them in third place. First place went to the College of Liberal Arts and Sciences.

Fulton Schools Academic Bowl teams have placed second in the 2015 and first in the three previous years.