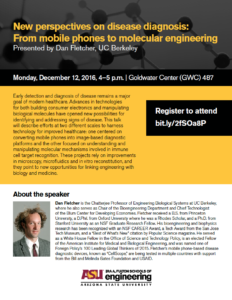 Download the flier. NOTE: the time has changed for this event.

Early detection and diagnosis of disease remains a major goal of modern healthcare. Advances in technologies for both building consumer electronics and manipulating biological molecules have opened new possibilities for identifying and addressing signs of disease. This talk will describe efforts at two different scales to harness technology for improved healthcare: one centered on converting mobile phones into image-based diagnostic platforms and the other focused on understanding and manipulating molecular mechanisms involved in immune cell target recognition. These projects rely on improvements in microscopy, microfluidics and in vitro reconstitution, and they point to new opportunities for linking engineering with biology and medicine.

Dan Fletcher is the Chatterjee Professor of Engineering Biological Systems at UC Berkeley, where he also serves as Chair of the Bioengineering Department and Chief Technologist of the Blum Center for Developing Economies. Fletcher received a Bachelor of Science from Princeton University, a Doctor of Philosophy from Oxford University where he was a Rhodes Scholar, and a doctorate from Stanford University as an NSF Graduate Research Fellow. His bioengineering and biophysics research has been recognized with an NSF CAREER Award, a Tech Award from the San Jose Tech Museum, and a “Best of What’s New” citation by Popular Science magazine. He served as a White House Fellow in the Office of Science and Technology Policy, is an elected Fellow of the American Institute for Medical and Biological Engineering, and was named one of Foreign Policy’s 100 Leading Global Thinkers of 2015. Fletcher’s mobile phone-based disease diagnostic devices, known as “CellScope,” are being tested in multiple countries with support from the Bill and Melinda Gates Foundation and USAID.