Learn how engineering can improve the quality of our lives, Nov. 7 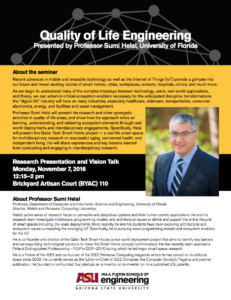 Recent advances in mobile and wearable technology as well as the Internet of Things (IoT) provide a glimpse into our future and reveal exciting visions of many “smarts”: smart homes, smart cities, workplaces, schools, hospitals, clinics, and much more. Driven by a technological revolution offering extremely low-power, wirelessly connected IoT, we can now envision and prototype impressive systems and applications to improve health and quality of life, assist the elderly and the disabled, enhance awareness of resources and the environment, enhance resource sustainability, and enrich user experience.

But as we begin to understand many of the complex interplays between technology, users, real-world applications, and theory, we are better positioned today to move beyond envisioning and prototyping, to advance critical ecosystem enablers that will realize a thriving “digital life” industry. Such an ecosystem is necessary for the anticipated disruptive transformations of many industries, especially healthcare, eldercare, transportation, consumer electronics, energy, and facilities and asset management.

Professor Sumi Helal will present his research and other synergetic activities in quality of life areas, and show how his approach relies on learning, understanding, and validating ecosystem elements through real-world deployments and interdisciplinary engagements. Specifically, he will present the Gator Tech Smart Home project — a real-life smart space for multidisciplinary research on successful aging, connected health, and independent living. He will share experiences and key lessons learned from conducting and engaging in interdisciplinary research.

Sumi Helal is Professor in the CISE Department at the University of Florida, and Director of its Mobile and Pervasive Computing Laboratory. He is co-founder and Director of the Gator Tech Smart House, a real-world deployment project that aims to identify key barriers and corresponding technological solutions to make the Smart Home concept commonplace (creating the “Smart Home in a Box” concept). He has recently been awarded a Finland Distinguished Professorship – FiDiPro (2011-2014) during which he led a major smart space research.

His active areas of research focus on pervasive and ubiquitous systems and their human-centric applications. Specifically he and his research team investigate middleware, programming models, and architectural issues to define and support the entire lifecycle of smart spaces including city-scale deployments. More recently, he and his students have been exploring architectural and ecosystem issues surrounding the emerging IoT. Specifically, he is pursuing novel programming models and ecosystem enablers for the IoT.

From 2001-2007, Professor Helal served as Director of Technology Development of the University of Florida Rehabilitation Engineering Research Center (RERC) on Aging and Independence. He is co-founder of the IEEE Pervasive Computing magazine and has served on its editorial board since 2002. He currently serves as the Editor-in-Chief of IEEE Computer, the Computer Society’s Flagship and premier publication. He founded or co-founded four startups: Phoneomena, Inc. (2002-2007, mobile middleware company), Pervasa, Inc., (2006-2011, IoT Platform company), Spaceify Oy (2015-, smart space middleware company), and Mobility Workx, LLC (2016-, an IPR company for licensing LTE and mobile network testing technology). He is inventor or co-inventor on nine published US patents. He received his Ph.D. in Computer Sciences in 1991. Professor Helal is a Fellow of the IEEE.