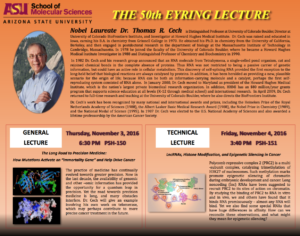 Learn from world-renowned Nobel Laureate Thomas R. Chech, who will discuss precision medicine at two talks as part of the 50th Eyring Lecture, hosted by the ASU School of Molecular Sciences.

The practice of medicine has continually evolved towards greater precision. Now in the last decade, the availability of genomic and other -omic information has provided the opportunity for a quantum leap in precision. Yet the road towards precision medicine is long, and many obstacles interfere. Cech will give an example involving his own work on telomerase, which may perhaps contribute to more precise cancer treatment in the future.

Polycomb repressive complex 2 (PRC2) is a multi -subunit complex, catalyzing trimethylation of H3K27 of nucleosomes. Such methylation marks promote epigenetic silencing of chromatin during embryonic development and cancer. Long noncoding (lnc) RNAs have been suggested to recruit PRC2 to its sites of action on chromatin. By studying the binding of PRC2 to RNA in vitro and in vivo, we and others have found that it binds RNA promiscuously – almost any RNA will bind. Yet we also find some special RNAs that have huge differences in affinity. How can we reconcile these observations, and what might they mean for epigenetic silencing?

In 1982 Cech and his research group announced that an RNA molecule from Tetrahymena, a single-celled pond organism, cut and rejoined chemical bonds in the complete absence of proteins. Thus RNA was not restricted to being a passive carrier of genetic information, but could have an active role in cellular metabolism. This discovery of self-splicing RNA provided the first exception to the long-held belief that biological reactions are always catalyzed by proteins. In addition, it has been heralded as providing a new, plausible scenario for the origin of life; because RNA can be both an information-carrying molecule and a catalyst, perhaps the first self- reproducing system consisted of RNA alone. In January 2000, Cech moved to Maryland as president of the Howard Hughes Medical Institute, which is the nation’s largest private biomedical research organization. In addition, HHMI has an $80 million/year grants program that supports science education at all levels (K-12 through medical school) and international research. In April 2009, Cech returned to full-time research and teaching at the University of Colorado Boulder, where he also directs the BioFrontiers Institute.

Cech’s work has been recognized by many national and international awards and prizes, including the Heineken Prize of the Royal Netherlands Academy of Sciences (1988), the Albert Lasker Basic Medical Research Award (1988), the Nobel Prize in Chemistry (1989), and the National Medal of Science (1995). In 1987 Cech was elected to the U.S. National Academy of Sciences and also awarded a lifetime professorship by the American Cancer Society.