United Way Campaign update: We’re more than half way there!

We are more than halfway to the Fulton Schools of Engineering United Way Goal of $40,000 with about $26,000 collected in pledges to date.

The United Way Kick-Off Breakfast for the Polytechnic campus will feature guest speakers and door prizes! 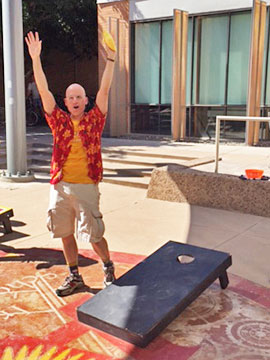 Jonathan Klane, assistant director of Safety Programs for the Ira A. Fulton Schools of Engineering, celebrates a great shot during the first round of the Cornhole Tournament to raise funds for United Way. Photographer: Rick Martorano/ASU.

The first round of the 2016 Fulton Engineering Cornhole Tournament raised $500 for the United Way.

Thank you to everyone that participated in the first stage of the tournament. Also, thanks to those who came to cheer on the teams and help out the United Way by purchasing lunch or bake sale items and participating in the 50/50 raffle.

We are proud to announce the four teams that will move to the final on October 28:

Please come support our teams playing on Friday, October 14 from 11 a.m. to 1 p.m. on the ECG Patio. Bring cash for lunch, which will be pizza provided by ECEE and bake sale items from SEBE. Bring your friends! The four winning teams will advance to the finals as well.

The 50/50 raffle will continue until Dean Squires chooses the winning ticket on October 28. We currently have over $70 in the pot and it is growing! 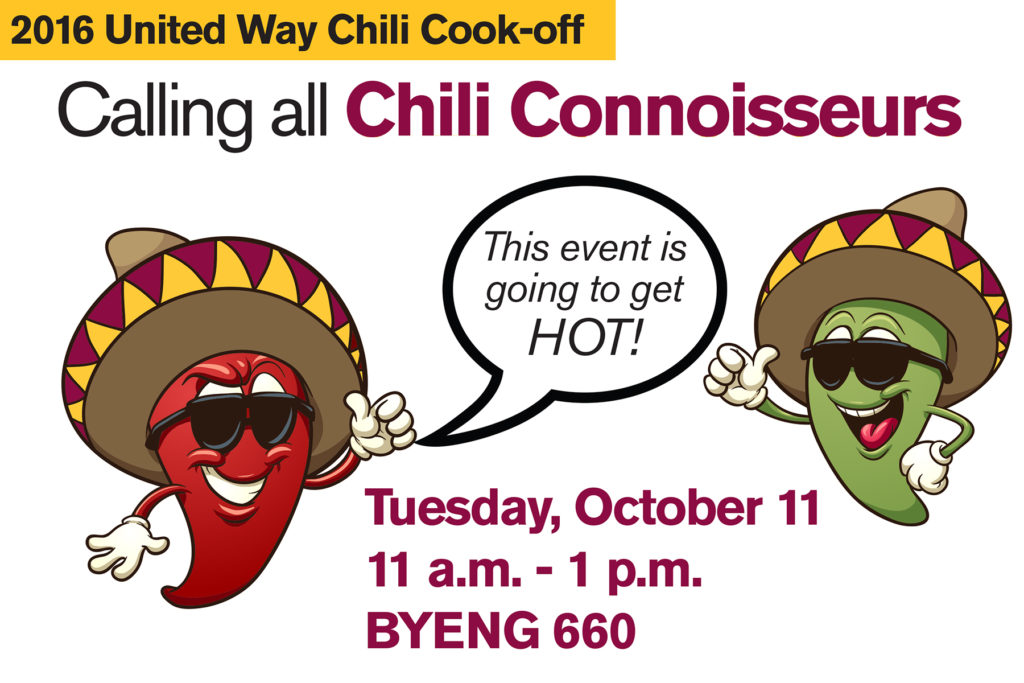 Attention all chili-heads: It’s going to be hot and spicy at Brickyard on October 11!

Do you consider yourself a chili aficionado? Ten competitors have tweaked their recipes to perfection and invite you to cast your vote for the top Fulton Engineering chili chef.  Each vote is $1 and casting multiple ballots is encouraged!  All proceeds will go to United Way.

Have you filled out your pledge form?

So far, we have almost 10 percent participation in the United Way campaign across the Fulton Schools of Engineering.  You can help increase that participation level by simply logging in to My ASU and completing the online form, or downloading the pledge form and turning it in to your United Way representative. You are not required to make a contribution, but you must complete a form to be considered a participant.