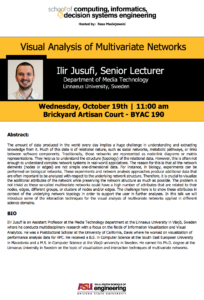 The amount of data produced in the world every day implies a huge challenge in understanding and extracting knowledge from it. Much of this data is of relational nature, such as social networks, metabolic pathways, or links between software components. Traditionally, those networks are represented as node-link diagrams or matrix representations. They help us to understand the structure (topology) of the relational data. However, this is often not enough to understand complex network systems in real-world applications. The reason for this is that all the network elements (nodes or edges) are not simple one-dimensional data. For instance, in biology, experiments can be performed on biological networks. These experiments and network analysis approaches produce additional data that are often important to be analyzed with respect to the underlying network structure. Therefore, it is crucial to visualize the additional attributes of the network while preserving the network structure as much as possible. The problem is not trivial as these so-called multivariate networks could have a high number of attributes that are related to their nodes, edges, different groups, or clusters of nodes and/or edges. The challenge here is to show these attributes in context of the underlying network topology in order to support the user in further analyses. In this talk we will introduce some of the interaction techniques for the visual analysis of multivariate networks applied in different science domains.

Ilir Jusufi is an Assistant Professor at the Media Technology department at the Linnaeus University in Växjö, Sweden where he conducts multidisciplinary research with a focus on the fields of Information Visualization and Visual Analytics. He was a Postdoctoral Scholar at the University of California, Davis where he worked on visualization of performance analysis data for HPC. He received a B.S. in Computer Science at the South East European University in Macedonia and a M.S. in Computer Science at the Växjö university in Sweden. He earned his Ph.D. degree at the Linnaeus University in Sweden on the topic of visualization and interaction techniques of multivariate networks.