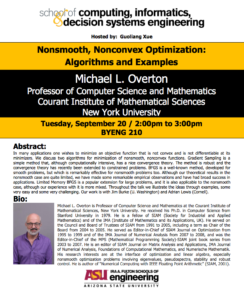 Learn about two algorithms for minimization of nonsmooth, nonconvex functions in this seminar hosted by Guoliang Xue.

In many applications one wishes to minimize an objective function that is not convex and is not differentiable at its minimizers. We discuss two algorithms for minimization of nonsmooth, nonconvex functions. Gradient Sampling is a simple method that, although computationally intensive, has a nice convergence theory. The method is robust and the convergence theory has recently been extended to constrained problems. BFGS is a well-known method, developed for smooth problems, but which is remarkably effective for nonsmooth problems too. Although our theoretical results in the nonsmooth case are quite limited, we have made some remarkable empirical observations and have had broad success in applications. Limited Memory BFGS is a popular extension for large problems, and it is also applicable to the nonsmooth case, although our experience with it is more mixed. Throughout the talk we illustrate the ideas through examples, some very easy and some very challenging. Our work is with Jim Burke (U. Washington) and Adrian Lewis (Cornell).

Michael L. Overton is Professor of Computer Science and Mathematics at the Courant Institute of Mathematical Sciences, New York University. He received his Ph.D. in Computer Science from Stanford University in 1979. He is a fellow of SIAM (Society for Industrial and Applied Mathematics) and of the IMA (Institute of Mathematics and its Applications, UK). He served on the Council and Board of Trustees of SIAM from 1991 to 2005, including a term as Chair of the Board from 2004 to 2005. He served as Editor-in-Chief of SIAM Journal on Optimization from 1995 to 1999 and of the IMA Journal of Numerical Analysis from 2007 to 2008, and was the Editor-in-Chief of the MPS (Mathematical Programming Society)-SIAM joint book series from 2003 to 2007. He is an editor of SIAM Journal on Matrix Analysis and Applications, IMA Journal of Numerical Analysis, Foundations of Computational Mathematics, and Numerische Mathematik. His research interests are at the interface of optimization and linear algebra, especially nonsmooth optimization problems involving eigenvalues, pseudospectra, stability and robust control. He is author of “Numerical Computing with IEEE Floating Point Arithmetic” (SIAM, 2001).