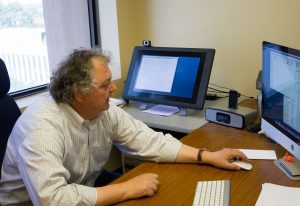 Electrical engineering Professor Marco Saraniti has been appointed one of three new vice deans of the Ira A. Fulton Schools of Engineering. In this role he looks forward to helping advance the schools’ programs, faculty and student initiatives.

As a result of the the school’s growth, Dean Kyle Squires has restructured the Fulton Schools’ administration to match that size and the new organizational needs it brings. The three vice deans will help manage day-to-day needs as well as advance strategic initiatives.

“The new administrative structure devised by Dean Squires strongly promotes interactions and exchange of ideas between the directors, the vice deans and the dean,” Saraniti says. “This non-hierarchical, strongly collaborative environment impressed me when Kyle described it.”

Saraniti has been a professor in the School of Electrical, Computer and Energy Engineering for the past eight and a half years.

“Marco has been a consistent innovator in ECEE programs,” Phillips says. “He was instrumental in the development of the online delivery of our undergraduate electrical engineering degree, which was the first undergraduate engineering program available fully online to be accredited by ABET. In his new role he has the opportunity to elevate the profile of not only ECEE, but all of the Fulton Schools.”

Saraniti and Phillips’ work on web-based knowledge delivery has led to about half of the undergraduate enrollment in ECEE incorporating online delivery to remote and resident students.

“The Ira A. Fulton Schools of Engineering, and ASU in general, is the right place to be if one wants to try new ideas and practices of university administration,” Saraniti says. “Here things happen quickly and new ideas, no matter how apparently unorthodox, are constantly tried ‘on the field.’ I’m honored to be working with a world-class faculty having an unusually broad range of research and educational interests.”

He has authored or co-authored more than 90 publications, four book chapters and four technical reports.

After earning his doctorate, Saraniti came to ASU as a faculty research associate in the electrical engineering department. Then, from 1998 to 2007, he worked at Illinois Institute of Technology in Chicago before returning to the Fulton Schools as a professor in August 2007.