Larry Mays’ accomplishments in water resources engineering over the past four decades continue to bring him prestigious honors.

The Ira A. Fulton Schools of Engineering professor was recently awarded the American Society of Civil Engineers (ASCE) Ven Te Chow Award for “exceptional achievement and significant contributions in research, education and practice” in the field of hydrologic engineering. 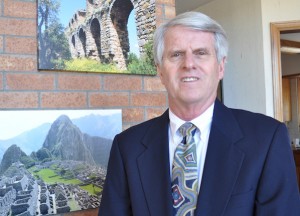 Professor Larry Mays’ has now been recognized as a distinguished alumnus by each of the universities where he earned undergraduate and graduate degrees.

The award recognizes Mays’ research on watersheds, water infrastructure and hydrological systems, encompassing every aspect of their design, management and operations.

His popular and authoritative water engineering textbooks and technical handbooks were also noted by the ASCE for their influence on water resources engineers throughout the world.

Mays was presented the ASCE award at the World Environmental and Water  Resources Congress in Florida on May 25. During the award ceremony he presented the keynote lecture “Ancient Stormwater Management.”

On April 21, he was inducted into the Academy of Civil Engineers at the Missouri University of Science and Technology (formerly the University of Missouri at Rolla) where he earned undergraduate and master’s degrees in civil engineering.

Inductees are selected for outstanding achievements as engineers, as well as for their professional and community leadership and improving the quality of engineering graduates.

The two awards add to a collection that more recently includes the Prince Sultan bin Abdulazziz International Surface Water Prize from Saudi Arabia, the ASCE Julian Hinds Award for research on water resources and hydrological systems engineering, and the Warren Hall Medal from the Universities Council on Water Resources.

In addition, he was previously recognized with a Distinguished Alumnus award from the Department of Civil Engineering at the University of Illinois, where he earned a doctoral degree.

Mays is also considered one of the foremost experts on ancient water systems, and one of his highly regarded books details how ancient water technologies can still be applied to managing water resources in a sustainable fashion.

He has been on the ASU engineering faculty for more than 27 years after 13 years at the University of Texas at Austin.