Wrestling with the ethical implications of unleashing our formidable new technologies

That’s particularly the case with modern military and security technologies. Tough social and political questions emerge in the wake of rapid advances.

Perspectives on the topic are the focus of Brad Allenby’s latest book, “The Applied Ethics of Military and Security Technologies.” 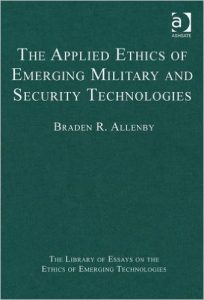 In a collection of essays — both Allenby’s and those of colleagues in fields related to these issues — the book delves into different and sometimes conflicting perspectives on the implications of the uses of autonomous robotic systems, unmanned aerial vehicles and biotechnologies in military and security operations, as well as the technological systems employed for cyber security and in cyber conflict.

“Emerging technologies, from nanotech and biotech to robotics, cognitive science, and infotech, are rapidly changing the world as we know it, and a lot of these new technologies directly or indirectly arise from military and security considerations,” Allenby says. “So you really can’t understand today’s high technology world, or the directions of technological evolution, without some knowledge of these systems. That’s part of what I teach in courses such as earth systems engineering and management, and sustainable engineering.”

Allenby says another critical concern is that technologies initially developed for military and national security needs often tend to spread into use throughout civil society. When that happens it brings with it ethical considerations involving such major issues as personal freedom and privacy, protection from criminal behavior and use of police power.

Public debate on such issues is “too often ill-informed and superficial,” he says. “As citizens and as professionals in a high-tech world with growing military and security challenges, we need to do better.”

The new book aims to help elevate the debate.