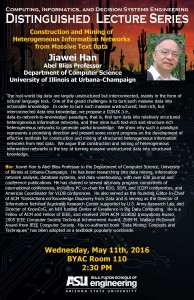 The real-world big data are largely unstructured but interconnected, mainly in the form of natural language text. One of the grand challenges is to turn such massive data into actionable knowledge. In order to turn such massive, unstructured, text-rich, but interconnected data into knowledge, we propose a D2N2K (i.e., data-to-network-to-knowledge) paradigm, that is, first turn data into relatively structured heterogeneous information networks, then mine such text-rich and structure-rich heterogeneous networks to generate useful knowledge. We show why such a paradigm represents a promising direction and present some recent progress on the development of effective methods for construction and mining of structured heterogenous information networks from text data. We argue that construction and mining of heterogenous information networks is the key at turning massive unstructured data into structured knowledge.

Jiawei Han is Abel Bliss Professor in the Department of Computer Science, University of Illinois at Urbana-Champaign. He has been researching into data mining, information network analysis, database systems and data warehousing, with more than 600 journal and conference publications. He has chaired or served on many program committees of international conferences, including PC co-chair for KDD, SDM and ICDM conferences, and Americas Coordinator for VLDB conferences. He also served as the founding Editor-in-Chief of ACM Transactions on Knowledge Discovery from Data and is serving as the Director of Information Network Academic Research Center supported by U.S. Army Research Lab, and Director of KnowEnG, an NIH funded Center of Excellence in Big Data Computing. He is a Fellow of ACM and Fellow of IEEE, and received 2004 ACM SIGKDD Innovations Award, 2005 IEEE Computer Society Technical Achievement Award, 2009 M. Wallace McDowell Award from IEEE Computer Society. His co-authored book, “Data Mining: Concepts and Techniques,” has been adopted as a textbook popularly worldwide.