Another successful Relay for Life event concludes at the Polytechnic Campus 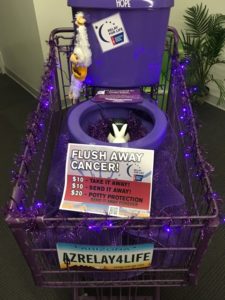 The Purple Potty alone contributed $600 to the $24,000 raised in less than six hours for the American Cancer Society.

For more than 10 years, the Polytechnic Campus has held an annual Relay for Life event to fundraise for the American Cancer Society.

This year, 29 teams of 300 members of the Polytechnic campus staff, faculty and students population raised more than $24,000, which supports the American Cancer Society’s mission of improving survival from cancer, decreasing the incidence of cancer, and improving the quality of life for those who have been diagnosed with cancer. Funds raised also support cancer research, patient services, early detection, treatment and education.

Since its inception in 2003, the event has grown to become more than just a community service activity. It serves as a way to bring the campus and the surrounding community together and students are able to interact with staff and faculty outside of an academic setting — all in support of a worthwhile cause.

Like many other Relay for Life events held across the nation, the event on the Polytechnic Campus featured team laps around the track, a survivors’ dinner and a solemn Luminaria ceremony to remember those lost to cancer.

But the Polytechnic Campus also has some Relay for Life traditions you won’t find elsewhere as well. A popular facet of the event is the Purple Potty — which is exactly what it sounds like. A purple toilet is shuffled from office to office and building to building as participants pay $10 to send it along to their colleagues or pay “potty protection insurance,” lest the colored can makes its way back to them. The Purple Potty alone brought in more than $600, putting a positive spin on the phrase “flushing money down the toilet.”

Though their past Relay for Life events have run 24 hours, this year the Polytechnic Campus’ fundraiser started at 5:30 p.m. and concluded at midnight, but still managed to raise more money than previous years.

Planning for next year’s event is already underway. The planning committed has selected March 24, 2017 for the next fundraiser.