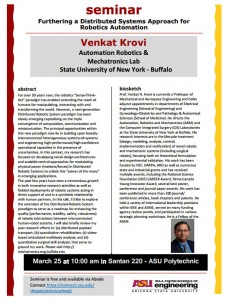 For over 50 years now, the robotics “Sense-Think-Act” paradigm has enabled extending the reach of humans for manipulating, interacting with and transforming the world. However, a next-generation Distributed Robotic System paradigm has been slowly emerging capitalizing on the triple convergence of computation, communication and miniaturization. The principal opportunities within this new paradigm now lie in building upon loosely-interconnected heterogeneous systems-of-systems and engineering high-performance/high-confidence operational capacities in the presence of uncertainties. In this context, his research has focused on developing novel design-architectures and scalable-control approaches for modulating physical power (motions/forces) in Distributed Robotic Systems to unlock this “power of the many” in emerging applications.

The past few years have seen a tremendous growth in both innovative research activities as well as fielded deployments of robotic systems acting in direct support of and in a symbiotic relationship with human partners. In this talk, he’d like to explore the extension of the Distributed-Robotic-System paradigm to serve as a roadmap for enhancing the quality (performance, stability, safety, robustness) of robotic interactions between interconnected human-robot systems. He will also briefly review his past research efforts in: (a) distributed payload transport; (b) quantitative rehabilitation; (c) video-based articulated-multibody analysis; and (d) quantitative surgical skill analysis; that serve to ground his work.

Venkat N. Krovi is currently a professor of mechanical and aerospace engineering and holds adjunct appointments in departments of Electrical Engineering (School of Engineering) and Gynecology-Obstetrics and Pathology & Anatomical Sciences (School of Medicine). He directs the Automation, Robotics and Mechatronics (ARM) and the Computer Integrated Surgery (CIS) Laboratories at the State University of New York at Buffalo. His research interests are in the lifecycle treatment (design, modeling, analysis, control, implementation and verification) of novel robotic and mechatronic systems (including surgical robots), focusing both on theoretical formulation and experimental validation. His work has been funded by NSF, DARPA, ARO as well as numerous state and industrial grants and has received multiple awards, including the National Science Foundation (NSF) CAREER Award, Petro-Canada Young Innovator Award, several best poster, conference and journal paper awards. His work has been published in more than 200 journal/conference articles, book chapters and patents. He held a variety of international leadership positions within IEEE and ASME, served on many funding agency review panels, and participated in various strategic planning workshops. He is a Fellow of the ASME.