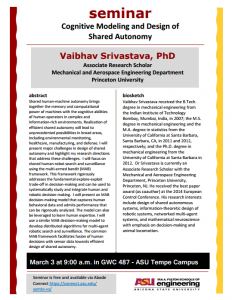 Shared human-machine autonomy brings together the memory and computational power of machines with the cognitive abilities of human operators in complex and information-rich environments. Realization of efficient shared autonomy will lead to unprecedented possibilities in broad areas, including environmental monitoring, healthcare, manufacturing, and defense. I will present major challenges in design of shared autonomy and highlight my research directions that address these challenges.  I will focus on shared human-robot search and surveillance using the multi-armed bandit (MAB) framework. This framework rigorously addresses the fundamental explore-exploit trade-off in decision-making and can be used to systematically study and integrate human and robotic decision-making.  I will present an MAB decision-making model that captures human behavioral data and admits performance that can be rigorously analyzed. The model can also be leveraged to learn human expertise. I will use a similar MAB decision-making model to develop distributed algorithms for multi-agent robotic search and surveillance. The common MAB framework facilitates fusion of human decisions with sensor data towards efficient design of shared autonomy.