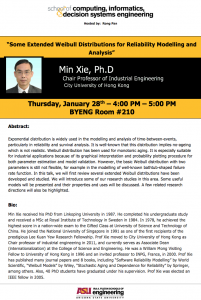 Some Extended Weibull Distributions for Reliability Modelling and Analysis

Abstract:
Exponential distribution is widely used in the modelling and analysis of time-between-events, particularly in reliability and survival analysis. It is well-known that this distribution implies no-ageing which is not realistic. Weibull distribution has been used for monotonic aging. It is especially suitable for industrial applications because of its graphical interpretation and probability plotting procedure for both parameter estimation and model validation. However, the basic Weibull distribution with two parameters is still not flexible, for example in the modelling of well-known bathtub-shaped failure rate function. In this talk, we will first review several extended Weibull distributions have been developed and studied. We will introduce some of our research studies in this area. Some useful models will be presented and their properties and uses will be discussed. A few related research directions will also be highlighted.
Bio:
Min Xie received his PhD from Linkoping University in 1987. He completed his undergraduate study and received a MSc at Royal Institute of Technology in Sweden in 1984. In 1978, he achieved the highest score in a nation-wide exam to the Gifted Class at University of Science and Technology of China. He joined the National University of Singapore in 1991 as one of the first recipients of the prestigious Lee Kuan Yew Research Fellowship. Prof Xie moved to City University of Hong Kong as Chair professor of industrial engineering in 2011, and currently serves as Associate Dean (internationalization) at the College of Science and Engineering. He was a William Mong Visiting Fellow to University of Hong Kong in 1996 and an invited professor to INPG, France, in 2000. Prof Xie has published many journal papers and 8 books, including “Software Reliability Modelling” by World Scientific, “Weibull Models” by Wiley, “Stochastic Aging and Dependence for Reliability” by Springer, among others. Also, 40 PhD students have graduated under his supervision. Prof Xie was elected an IEEE fellow in 2005.