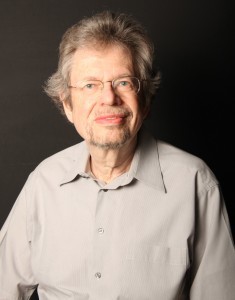 Robert Pfeffer was honored for his career achievements in chemical engineering at the recent annual meeting of the American Institute of Chemical Engineers (AIChE) in Salt Lake City.

The AIChE is the world’s leading organization for chemical engineering professionals, with more than 50,000 members from more than 100 countries.

Pfeffer, a research professor in the School for Engineering of Matter, Transport and Energy, came to Arizona State University in 2006 after a long career that included high-ranking faculty, administrative and research leadership positions at the New Jersey Institute of Technology and the City College of the City University of New York.

At a special session of the AIChE meeting, Pfeffer was introduced as one of the “pioneers of particle technology,” followed by a presentation that highlighted the long list of areas in which he has done significant research.

The session chair spotlighted his work on the fluidization of nanostructured silica aerogels for use as a filter for submicron oil droplets in air, inverse fluidization of silica aerogels for removal of oil and other organic contaminants from wastewater, and the continuous polymer coating of silica nanoparticles and pharmaceutical particles using a hollow fiber-based crystallizer.

Especially noted was Pfeffer’s research in microjet-assisted fluidization of nanopowders, for which he has been granted three U.S. patents. Overall, he has earned 11 U.S. patents during his career.

The introduction was followed by six technical talks in Pfeffer’s honor by leading particle technology researchers, followed by remarks from two of his former students who earned doctoral degrees under his guidance and by the president of the International Fine Particle Research Institute.

The institute is a consortium of about 25 large multinational companies that sponsors state-of-the-art research in fine particles at major Universities throughout the world. Pfeffer helped found the institute in 1979 and served as its U.S. scientific adviser for 23 years.

To celebrate Pfeffer’s special recognition by the AIChE, faculty members in the chemical engineering program in the School for Engineering of Matter, Transport and Energy organized a tribute to Pfeffer as part of the ASU reception at the annual meeting. Friends and colleagues offered comments about his many contributions to his field.

“He is a scholar who has a genuine interest in solving critical engineering problems and he truly cares about our chemical engineering program and its students,” ASU Regent’s Professor Jerry Lin said of Pfeffer. “He has published many journal papers on important research conducted at ASU, and helped a good number of students succeed in earning master’s and doctoral degrees.”