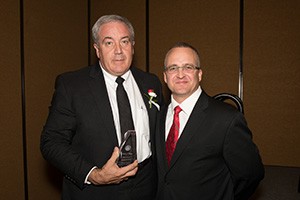 ASU Professor Thomas E. Schildgen, at left, stands with Ted Branoff, chair of the Department of Technology at Illinois State University. Schildgen was inducted into the ISU College of Applied Science and Technology Hall of Fame.

Thomas E. Schildgen was inducted into the Illinois State University 2015 College of Applied Science and Technology Hall of Fame on October 2, 2015.

CAST Hall of Fame inductees are chosen for outstanding performance and leadership in their career fields; committed service to their communities; favorable statewide, national, or international recognition; outstanding service to Illinois State University; and work that has benefitted a pronounced segment of society.

“It was a rare opportunity to travel back in time and spend a weekend at my alma mater,” Schildgen said. “I had the opportunity to speak with Illinois State President Larry Dietz, who was at Iowa State University with Michael Crow, and it was very clear to me that what is happening at ASU is being watched carefully by many other institutions.”

Schildgen served four years on the faculty of Illinois State University prior to joining ASU, where he is starting his 35th year as a professor in the Graphic Information Technology program. 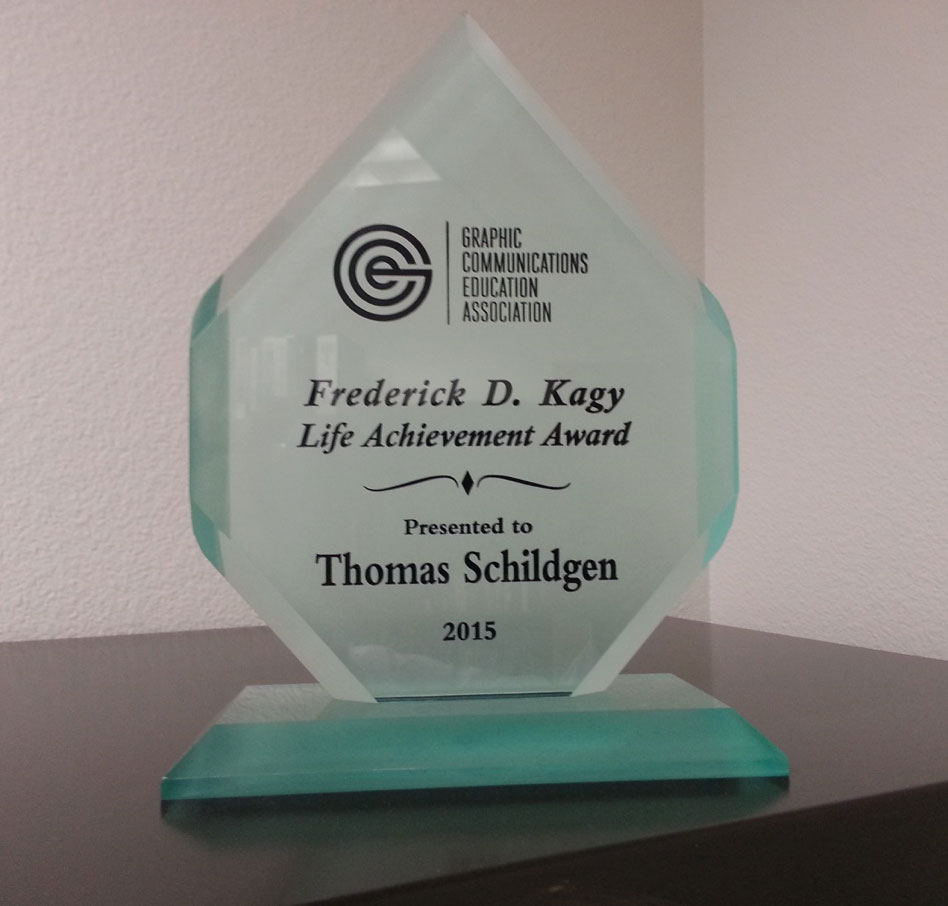 “What makes this award so special is that I studied under Fred Kagy,” Schildgen said. “Then I went on to work as a faculty member beside him for ears. Fred was the person who told me to take the job at Arizona State University almost 35 years ago.”

He has held a variety of academic and service positions at ASU including chair for the Department of Technology Management, past president of University Senate and past chair of University Academic Council.

Schildgen remains very active in his community, having served as the Chair of the Board of Directors and Executive Committee for the Mesa United Way. He is a board member of the Mesa Rotary and currently is the Quarter Master for the US Marshals Posse. He was inducted into the Soderstrom Society and the Golden Cylinder Society which represent national leadership in the graphics industry.

Schildgen’s current research agenda focuses on electron microscopy for quality control of new developmental diodes used in printing new sources of illumination to replace the Edison bulb and mercury fluorescent tubes. He authored the book Pocket Guide to Color with Digital Applications and has numerous chapters in books, and articles in educational and industry journals.

Working at both local and international levels, he has made a difference in people’s lives by coordinating several World Bank funded projects with the Republic of Turkey. He has worked with the U.S. Department of Defense Dependent Schools in Germany, and has hosted an industry tour group of South Korean CEO’s.