Candace Chan has been awarded an Alexander von Humboldt Foundation fellowship that will enable her to work at one of the Max Planck Society’s prestigious research institutes in Germany.

Chan is an assistant professor of materials science and engineering in the School for Engineering of Matter, Transport and Energy. 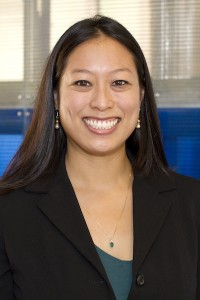 Humboldt Foundation fellowships are awarded through a highly competitive process to researchers whose efforts hold promise for contributing to important advances in engineering, science and scholarship.

The fellowship calls for her to conduct research at a Max Planck institute near the city of Düsseldorf for 15 months over a three-year period. Chan expects to begin in summer 2016.

She will seek to expand her efforts to develop new photocatalytic materials that could be used to improve the performance of technologies employed in energy production and conversion, and in water treatment techniques, among other areas.

Chan will team with Harun Tüysüz, a group leader in heterogeneous catalysis research at the Max Planck Institut für Kohlenforschung (Max Planck Institute for Coal Research), which is known for its many contributions to the field of catalysis.

Chan previously collaborated with Tüysüz  when she was a postdoctoral researcher at the University of California, Berkeley, after earning a doctoral degree at Stanford University. They also are editors of the book to be published this fall, “Topics in Current Chemistry: Solar Energy for Fuels,” about the science of harnessing solar energy to create fuels such as hydrogen gas using photoelectrochemistry.

During her research fellowship period, Chan and Tüysüz plan to explore ways to enhance the abilities of titanium and tantalum oxides at the nanoscale level to use energy from light to spark chemical reactions.

Specifically, they will focus on using titanium and tantalum oxides with “disordered” nanostructures, in which atoms are bonded in varying configurations rather than uniform symmetrical patterns.

The nanostructural defects, however, typically prevent such materials from being efficient catalysts, but Chan and Tüysüz hope to make them work despite the defects.

“If we can make effective photocatalysts with materials that have these defects, then these materials could be made much more inexpensively, since we can avoid energy-intensive methods that are typically used to synthesize materials with high crystalline quality,” she says.

Such progress could have a significant impact on the development of new materials to make hydrogen, which holds promise to someday become a plentiful source of clean, renewable energy, Chan says.

In the course of the research Chan and her collaborator expect to also gain a better understanding of the fundamental mechanisms of photocatalysis.

What they learn is likely to aid Chan in her role as a lead researcher with Nanotechnology Enabled Water Treatment Systems (NEWT), a new multi-university National Science Foundation Engineering Research Center in which ASU is a partner institution.

“I think, for instance, we will be able to use new photocatalysts for industrial wastewater treatment to convert toxic contaminants into something nontoxic,” she says.

Chan’s Humboldt Foundation fellowship should also prove beneficial to her student research assistants. They will get opportunities to use ASU’s advanced transmission electron microscopes and perform electrochemical tests in Chan’s lab at ASU to further characterize the materials being synthesized and studied in Germany.

She also plans to have students assist in composing papers to report on the research findings.