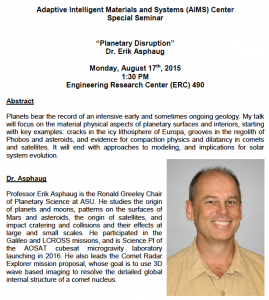 Abstract
Planets bear the record of an intensive early and sometimes ongoing geology. My talk will focus on the material physical aspects of planetary surfaces and interiors, starting with key examples: cracks in the icy lithosphere of Europa, grooves in the regolith of Phobos and asteroids, and evidence for compaction physics and dilatancy in comets and satellites. It will end with approaches to modeling, and implications for solar system evolution.

Bio
Professor Erik Asphaug is the Ronald Greeley Chair of Planetary Science at ASU. He studies the origin of planets and moons, patterns on the surfaces of Mars and asteroids, the origin of satellites, and impact cratering and collisions and their effects at large and small scales. He participated in the Galileo and LCROSS missions, and is Science PI of the AOSAT cubesat microgravity laboratory launching in 2016. He also leads the Comet Radar Explorer mission proposal, whose goal is to use 3-D wave based imaging to resolve the detailed global internal structure of a comet nucleus.

Hosted by the Adaptive Intelligent Materials and Systems (AIMS) Center