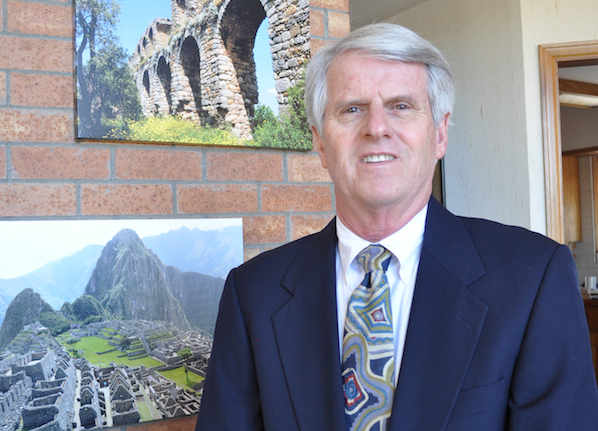 Larry Mays’ work in water resources engineering has had an international impact.

Arizona State University civil and environmental engineering professor Larry W. Mays has been recognized for his career achievements by one of the leading professional organizations in his field.

Mays recently received the Warren A. Hall Medal from the Universities Council on Water Resources (UCOWR) for his accomplishments in water resources research and scholarship.

The council is a coalition of leaders in water resources education, research and public service from universities, non-academic institutions and international affiliates.

The Warren A. Hall Medal, named in honor of one of the council’s founders and a well-known leader in water resources research and education, honors those with distinctive records of advancing knowledge in the area – particularly teachers who have demonstrated a strong commitment to the education of students.

Mays is on the faculty of the School of Sustainable Engineering and the Built Environment, one of ASU’s Ira A. Fulton Schools of Engineering. He has been at ASU for 26 years after beginning his academic career 13 years earlier at the University of Texas at Austin.

Among his national and international honors are the American Society of Civil Engineers Julian Hinds Award and the Prince Sultan Bin Abdulaziz International Prize for Water – Surface Water Prize presented to him in Saudi Arabia in 2014.

He also has a Distinguished Alumnus Award from the Department of Civil Engineering at the University of Illinois at Urbana-Champaign.

In the 1990s Mays served for four years on the board of directors of the Universities Council on Water Resources, and one year as president.

He received the Hall Medal during ceremonies at the annual conference sponsored by the council, along with the National Institute for Water Resources and the Consortium of Universities for the Advancement of Hydrological Science.

During the conference banquet, Mays delivered the address “Realities of Water Resources Sustainability, Traditional Knowledge and the Future.”