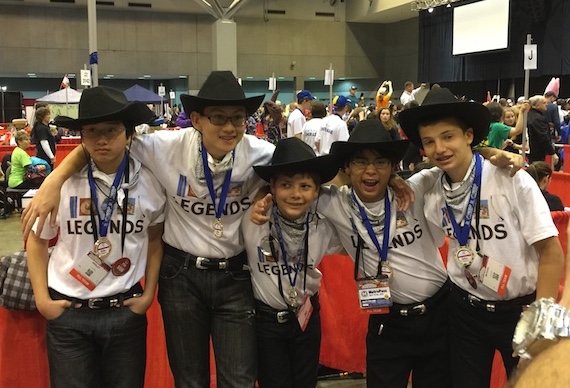 Local Legends, a group of five students at Catalina Foothills Community School in Tucson, was one of 105 teams from 35 countries to gather for the annual event.

The squad was one of more than 300 teams of youngsters from schools and communities throughout Arizona to participate last year in the AZ FLL program, which is managed by ASU’s Ira A. Fulton Schools of Engineering.

Local Legends finished atop the 62 teams that earned their way to the 2014 AZ FLL championship tournament on ASU’s Tempe campus.

FIRST (For Inspiration and Recognition of Science and Technology) is an international organization founded by renowned inventor Dean Kamen.

The FIRST LEGO League robotics competitions encourage students to use science, technology, engineering and math skills to design, build and program robots made from LEGO MINDSTORMS kits, and to enable the robots to perform various tasks to earn points.

Teams also must complete a research project designed to give them problem-solving challenges. They are judged during competitions on teamwork, professionalism, respect for fellow competitors and similar FLL “core values.” 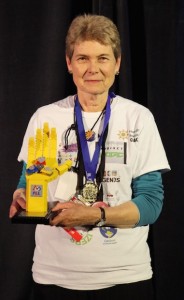 Charlotte Ackerman won an award at the FLL Word Festival for her years as a coach and mentor of student teams involved in engineering, technology and science competitions. She is the coach of the Local Legends, winners of last year’s Arizona FIRST LEGO League state championship tournament.

The members of Local Legends gathered every weekend during the past several months to prepare for the FLL World Festival, said Charlotte Ackerman, the team’s coach and a teacher leader for science and engineering practices at Catalina Foothills school.

The team then put in some extra work on weeknights as the World Festival approached.

“It was both a marathon and a whirlwind getting ready to go,” Ackerman said.

Local Legends overcame a setback when a part of its robot broke. But the team bounced back into contention, earning awards nominations for their research efforts, professionalism and technical know-how, while receiving positive comments from judges.

In addition, Ackerman won an award for her coaching and mentoring contributions.

Her nomination for the award was supplemented by letters of praise from former students on the 60 teams she has coached over the years.

Some of the students have gone on to study engineering and science at leading universities. They noted Ackerman’s influence on their choice of what paths to pursue in higher education and careers.

Ackerman and her Local Legends team came home from the FLL World Festival “inspired and with some new ideas for robot programming to try,” she said. “The team immediately began talking about how they could apply what they learned” to prepare for this year’s Arizona FLL competition.

The 2015 season theme is Trash Trek. Both the robotics “playing field” and the research project for the competition will challenge students to explore better ways to manage the world’s trash.

“One of the beautiful things about FLL is that each season’s theme encourages children to think critically about real-world problems and innovative ways to go about solving them. Teams learn that engineering is fun and important,” said Jennifer Velez, a senior education outreach coordinator for the Fulton Schools of Engineering and the FLL managing partner in Arizona.

As many as 350 teams from throughout the state are expected to compete this year for a chance to go to the state tournament.

With the increasing number of teams, the program will need more volunteers, Velez said. Some volunteers work directly with teams as mentors, others work in technical and nontechnical roles to help put on regional tournaments and the state championship tournament.

Jiaqi Wu contributed to the report