While the Order of the Engineer Ceremony at Arizona State University is always a celebration of the bond shared by engineers—this year it will also showcase a familial bond. 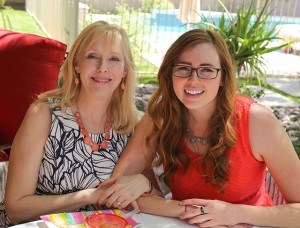 Rebecca and Morgan Godley will attend the upcoming Order of the Engineer ceremony where Rebecca (left) will be the guest speaker and her daughter Morgan (right) will take the Obligation of the Engineer requisite to joining the Order.

Rebecca Godley is the guest speaker at this year’s ceremony taking place on April 28, 2015, when her daughter, Morgan Godley, will be accepted into the Order of the Engineer alongside a projected 200 other engineers.

An association for graduates of accredited engineering programs and professional engineers in the U.S., the Order of the Engineer emphasizes pride and responsibility in the engineering profession. For students, the ceremony signifies their transition from training to the workforce by presenting them with a public and visible symbol—a stainless steel ring worn on the small finger of the working hand—that identifies them as an engineer committed to practicing and upholding ethical engineering values.

As the guest speaker, Rebecca will share insights related to engineering ethics gained over her 30 years of experience in environmental compliance and remediation. A registered professional engineer in Arizona, Rebecca is the Environmental Section Lead for the City of Phoenix Aviation Department where she is responsible for environmental program management and the implementation of the Clean Air Act, Clean Water Act, and hazardous waste and pollution prevention programs at three airports in the Phoenix metro area, including Phoenix Sky Harbor International Airport.

As a manager of six professionals that work with more than 700 staff and 80 tenants, and an overseer of capital and operating project budgets totaling around $3 million per year, for Rebecca, ethics and engineering collide on a daily basis.

“As engineers we conduct business, calculate and choose between alternatives. These activities have the potential to either uplift or damage the public good,” said Rebecca. As a result, she’s made a daily habit of asking herself, “Am I doing the right thing for the right reason?” Wearing the ring that she received at an Order of the Engineer ceremony is part of her daily observance.

Rebecca earned her master’s degree in chemical engineering from the University of Arkansas in 1984, but it wasn’t until February 2014 that she had the opportunity to join the Order. She participated in an Order of the Engineer ceremony led by then City Engineer for the City of Phoenix, Wylie Bearup who is now a professor of practice in the School for Sustainable Engineering and the Built Environment, one of the Ira A. Fulton Schools of Engineering. Bearup was last year’s guest speaker at ASU’s Order of the Engineer ceremony.

“As I recited the Obligation of the Engineer I recalled a feeling of recognition for my past efforts and a renewal of my spirit for the future,” said Rebecca.

As a mother, she is proud that her daughter finds value in joining the Order. Morgan is set to graduate in May with a bachelor’s degree in biomedical engineering from the Ira A. Fulton Schools of Engineering.

Morgan has accepted a job as a Quality Engineer and Analyst with Cognizant, a global leader in business and technology services, which she will start in June. She looks forward to working for a company that offers consulting services to some of the biggest names in life sciences, biotechnology, pharmaceuticals and health insurance.

At the onset of her career, Morgan values the opportunity to connect with engineers that possess a spirit of pride in their profession and an understanding of their responsibilities and obligations to society and the natural world.

“Joining the Order is an opportunity to actively make a promise to myself to be an engineer with integrity from here on out,” said Morgan.

The first Order of the Engineer ceremony was held on June 4, 1970, at Cleveland State University. Since then, ceremonies have been conducted by links (local sections) around the country.

The Order of the Engineer at Arizona State University was first organized in 2011 by Steven Trimble, a professor of practice in the School for Engineering of Matter, Transport and Energy, for the graduating students in his Senior Design class. Joy Marsalla, then an engineering undergraduate student, and alumnus Chris Kmetty supported his efforts.

The following semester the Order of the Engineer was made available to the entire senior class of the ABET-accredited programs of the Ira A. Fulton Schools of Engineering.

Since then the event has been held regularly and is hosted by the Fulton Schools of Engineering and the Engineering Alumni Chapter with support from student representatives. The ceremonies are open to graduating seniors, alumni of ABET-accredited programs and Professional Engineers licensed in the U.S.

The event aligns with the Fulton Schools of Engineering’s commitment to actively promote a strong ethical foundation for its engineering students.

“Engineers impact people’s lives on a daily basis. As educators we aim to illustrate that, as part of the engineering process, engineers must carefully consider the impact of the technology they are developing on the public and the choices they are making in its development,” said Jim Collofello, Senior Associate Dean of Academic and Student Affairs and professor in the School of Computing, Informatics, and Decision Systems Engineering, part of the Fulton Schools of Engineering.

The Obligation of the Engineer, recited at each ceremony, calls for members of the Order to “uphold devotion to the standards and the dignity” of the engineering profession. After 30 years of engineering service Rebecca says this passage rings true. “We must be trustworthy and always remember that the public depends on us to adhere to high standards.”