A design created by ASU students was selected for the official t-shirt of the International Foundation Congress and Equipment Exposition.

The IFCEE is the world’s largest exhibition dedicated solely to the building foundation construction industry. It showcases technology related to design and construction of foundations and ground improvement systems for bridges, buildings, dams and other civil infrastructure.

The event was co-sponsored by the Geo-Institute of the American Society of Civil Engineering (ASCE), the Deep Foundation Institute, the Association of Drilled Shaft Contractors, and the Pile Driving Contractors Association.

ASU’s team was the only one to qualify for all five competitions and to receive awards in three of them.

The group representing the School for Sustainable Engineering and the Built Environment, one of ASU’s Ira A. Fulton Schools of Engineering, consisted of 13 graduate students and four undergraduates.

A t-shirt design by graduate students Nariman Mahabadi and Xianglei Zeng was selected for the official conference t-shirt. It was printed and distributed to all students at the event. 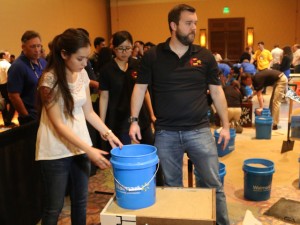 The best video production award went to graduate students Vel Palinivelu and Jesus Esquivel, and undergraduate Miriam Woolley, for a video to educate a K-12 audience on geotechnical factors affecting the strength of building foundations.

Graduate student Evan Benson and undergraduate Jake Andersen made up ASU’s Geo-prediction team. They had to predict the capacity of two test piles from laboratory and field test results.

The test piles had been installed for a major construction project and load tested for quality-assurance purposes. For the competition, predictions of pile settlement under the design load and of the load at failure for each pile were compared to the measured values.

The ASU Geo-prediction team placed among the finalists.

The mechanically stabilized earth wall team consisted of graduate students Yutong Lu and John Furniss, and undergraduates Devinne Ramirez and Miriam Wooley. The team finished in the top 10 for their event.

Funding to send the students to the industry exposition was provided by the Ira A. Fulton endowment for the Chair for Geotechnical Engineering, the School of Sustainable Engineering and the Built Environment, and the Ehret Student Team Competition Endowment.

ASU expects to organize a student team for similar competitions at the joint meeting of the American Society of Civil Engineers Geotechnical Institute and Structural Engineering Institute in February 2016 at the Phoenix Convention Center.

Jiaqi Wu contributed to this report