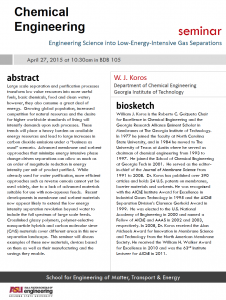 Abstract
Large scale separation and purification processes transform low value resources into more useful fuels, basic chemicals, food and clean water; however, they also consume a great deal of energy. Growing global population, increased competition for natural resources and the desire for higher worldwide standards of living will intensify demands upon such processes. These trends will place a heavy burden on available energy resources and lead to large increases in carbon dioxide emissions under a “business as usual” scenario. Advanced membrane and sorbent approaches that minimize energy intensive phase change-driven separations can allow as much as an order of magnitude reduction in energy intensity per unit of product purified. While already used for water purification, more efficient approaches such as reverse osmosis cannot yet be used widely, due to a lack of advanced materials suitable for use with non-aqueous feeds. Recent developments in membrane and sorbent materials now appear likely to extend the low energy intensity separation revolution beyond water to include the full spectrum of large scale feeds. Crosslinked glassy polymers, polymer-selective nanoparticle hybrids and carbon molecular sieve (CMS) materials cover different areas in this new separation landscape. This seminar will discuss examples of these new materials, devices based on them as well as their manufacturing and the savings they enable.

Bio
William J. Koros is the Roberto C. Goizueta Chair for Excellence in Chemical Engineering and the Georgia Research Alliance Eminent Scholar in Membranes at The Georgia Institute of Technology. In 1977 he joined the faculty at North Carolina State University, and in 1984 he moved to The University of Texas at Austin where he served as chairman of chemical engineering from 1993 to 1997. He joined the School of Chemical Engineering at Georgia Tech in 2001. He served as the editor-in-chief of the Journal of Membrane Science from 1991 to 2008. Dr. Koros has published over 390 articles and holds 24 U.S. patents on membranes, barrier materials and sorbents. He was recognized with the AIChE Institute Award for Excellence in Industrial Gases Technology in 1995 and the AIChE Separation Division’s Clarence Gerhold Award in 1999. He was elected to the U.S. National Academy of Engineering in 2000 and named a Fellow of AIChE and AAAS in 2002 and 2003, respectively. In 2008, Dr. Koros received the Alan Michaels Award for Innovation in Membrane Science and Technology from the North American Membrane Society. He received the William H. Walker Award for Excellence in 2010 and was the 63rd Institute Lecturer for AIChE in 2011.