Seminar: A Geometrical Derivation of the Equations of Motion for Constrained Mechanical Systems, April 15 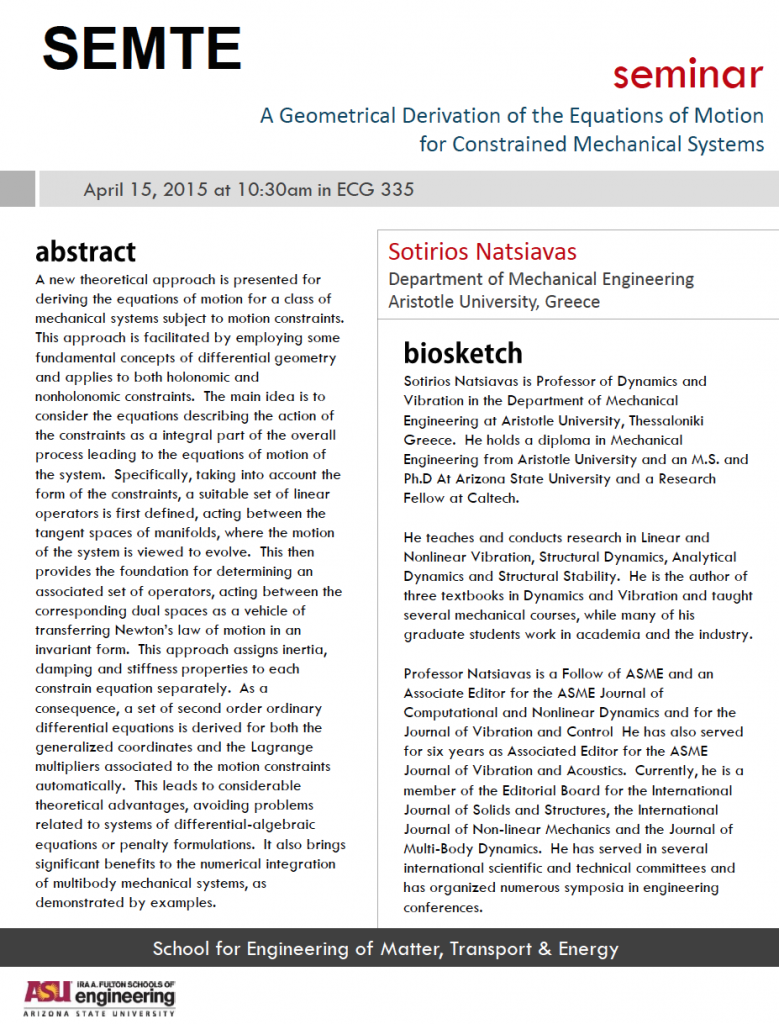 Abstract
A new theoretical approach is presented for deriving the equations of motion for a class of mechanical systems subject to motion constraints. This approach is facilitated by employing some fundamental concepts of differential geometry and applies to both holonomic and nonholonomic constraints. The main idea is to consider the equations describing the action of the constraints as a integral part of the overall process leading to the equations of motion of the system. Specifically, taking into account the form of the constraints, a suitable set of linear operators is first defined, acting between the tangent spaces of manifolds, where the motion of the system is viewed to evolve. This then provides the foundation for determining an associated set of operators, acting between the corresponding dual spaces as a vehicle of transferring Newton’s law of motion in an invariant form. This approach assigns inertia, damping and stiffness properties to each constrain equation separately. As a consequence, a set of second order ordinary differential equations is derived for both the generalized coordinates and the Lagrange multipliers associated to the motion constraints automatically. This leads to considerable theoretical advantages, avoiding problems related to systems of differential-algebraic equations or penalty formulations. It also brings significant benefits to the numerical integration of multibody mechanical systems, as demonstrated by examples.

Bio
Sotirios Natsiavas is Professor of Dynamics and Vibration in the Department of Mechanical Engineering at Aristotle University, Thessaloniki Greece. He holds a diploma in Mechanical Engineering from Aristotle University and an M.S. and Ph.D At Arizona State University and a Research Fellow at Caltech.
He teaches and conducts research in Linear and Nonlinear Vibration, Structural Dynamics, Analytical Dynamics and Structural Stability. He is the author of three textbooks in Dynamics and Vibration and taught several mechanical courses, while many of his graduate students work in academia and the industry.
Professor Natsiavas is a Follow of ASME and an Associate Editor for the ASME Journal of Computational and Nonlinear Dynamics and for the Journal of Vibration and Control He has also served for six years as Associated Editor for the ASME Journal of Vibration and Acoustics. Currently, he is a member of the Editorial Board for the International Journal of Solids and Structures, the International Journal of Non-linear Mechanics and the Journal of Multi-Body Dynamics. He has served in several international scientific and technical committees and has organized numerous symposia in engineering conferences.