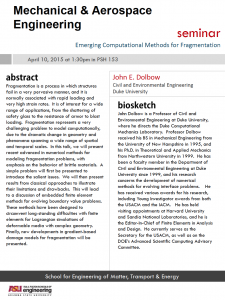 Abstract
Fragmentation is a process in which structures fail in a very pervasive manner, and it is normally associated with rapid loading and very high strain rates. It is of interest for a wide range of applications, from the shattering of safety glass to the resistance of armor to blast loading. Fragmentation represents a very challenging problem to model computationally, due to the dramatic change in geometry and phenomena spanning a wide range of spatial and temporal scales. In this talk, Dolbow will present recent advanced in numerical methods for modeling fragmentation problems, with emphasis on the behavior of brittle materials. A simple problem will first be presented to introduce the salient issues. He will then present results from classical approaches to illustrate their limitations and drawbacks. This will lead to a discussion of embedded finite element methods for evolving boundary value problems. These methods have been designed to circumvent long-standing difficulties with finite elements for Lagrangian simulations of deformable media with complex geometry. Finally, new developments in gradient-based damage models for fragmentation will be presented.

Bio
John Dolbow is a Professor of Civil and Environmental Engineering at Duke University, where he directs the Duke Computational Mechanics Laboratory. Professor Dolbow received his BS in Mechanical Engineering from the University of New Hampshire in 1995, and his Ph.D. in Theoretical and Applied Mechanics from Northwestern University in 1999. He has been a faculty member in the Department of Civil and Environmental Engineering at Duke University since 1999, and his research concerns the development of numerical methods for evolving interface problems. He has received various awards for his research, including Young Investigator awards from both the USACM and the IACM. He has held visiting appointments at Harvard University and Sandia National Laboratories, and he is the Editor-In-Chief of Finite Elements in Analysis and Design. He currently serves as the Secretary for the USACM, as well as on the DOE’s Advanced Scientific Computing Advisory Committee.